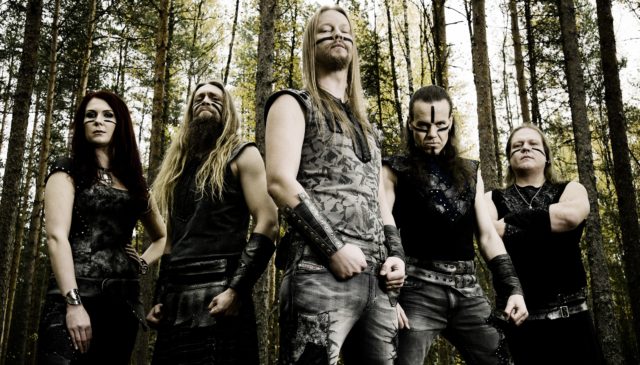 Finnish folk metal heroes Ensiferum are set to unleash their sixth studio record, One Man Army, to the world. We sat down with frontman Petri Lindroos to discuss the new record, the difference between performing at a festival and an intimate gig and the dark side of the internet.

Hello, how are you?

Hi, I’m just fine and getting mentally ready to get back on the road. It´s been a while since the last tour what we did so we are looking forward to touring again.

You are about to drop your sixth studio record, One Man Army, in about three weeks. What can fans expect?

Our fans can expect a really kick ass album with great sound. Our producer/recorder Mr. Anssi Kippo really made that happen for us and his ideas for the songs also brought new ways for Ensiferum what our fans with sharp ears can hear. We added more speed and Metal to “One Man Army” album and that was definitely the right call after the more diverse “Unsung Heroes” album. This time our songs are fitting tightly together creating a great Folk Metal album.

It continues Ensiferum’s approach to folk metal. What exactly do you want to achieve with One Man Army?

Like I said above, we wanted to have more heavy metal in our songs this time and also find the perfect balance with folk and orchestration and we did good job on that one. Now we are more wiser about all that stuff since “From afar” album on which we over did it a little bit. Hopefully our fans agree with us on that.

One Man Army is the next chapter for the band, following 2012’s Unsung Heroes. Do you feel with the release of this record that the band can reach new heights in the metal scene?

Sure, that´s the aim of Ensiferum and also to get new opportunities on the touring front by making a great album that will get noticed around the world and playing good shows with it. This is our strongest album in my opinion and we are feeling great about that and that will be seen on stage as well in the near future. Right now the sky is the limit for us and feels like that´s too low.

Recently, the track ‘Heathen Horde’ was made available to stream via Metal Hammer. How important is the modern world of social media and the internet to the band?

The importance of those is growing bigger with these days but there is the down side to that also. It´s so much easier the get news out to our fans in an instant than 20 years ago when you needed to wait for a magazine release etc..So that is helping bands to get visibility very easily nowadays but also it gives people almost too much choices about who to follow. We are very old school and this internet and social media thing is feeling kinda weird to us but we try to keep up and stay in touch online.

And of course, with the digital age there is also the issue of records leaking and being illegally downloaded. Is this a concern for you with One Man Army?

Yeah and then there is that side of internet. There isn’t much what a band can do about that problem so that is in the hands of the listener is he going to download illegally or buy the album in the right way. Internet has also caused the fall of record shops where I used to buy my albums by actually going there and checking out new albums, listening them and then end up buying one or more CD´s and going home with a smile on my face. I’m pretty sure this album will also get leaked at some point. I hope people who listen to it online and like it that they would then buy it the right way, that way they can help us to keep on doing great albums in the future.

Ensiferum were announced to be playing this year’s Bloodstock Festival back in November. The last time the band played was back in 2010, how excited are you to perform at this year’s festival?

Bloodstock festival has been good to us always and we are looking forward to play again there this year. Our show back in 2010 was really great and crowd was amazing so we are excited to see that again.

Do you prefer to play big open air festivals or small intimate venues?

Both suites for us really well so it´s hard to prefer one over another. Festivals are great to play on big stages and see huge amount of people having hands in the air and for us to meet our friends in other bands so that´s a win-win situation. Indoor shows offers that intimacy what festivals lacks, fans are closer to us and light show usually work better due no sun in the sky and also sound isn’t bothered by wind carrying it away to the next town.

And with One Man Army set for release in about three weeks time, what can we expect from Ensiferum in 2015?

The First shows will be in Finland and then the European tour will start on 11th of March. There´s a handful of festivals confirmed so more info on our website Ensiferum.com Here a few festivals what we´ll do: Hellfest, France. Wacken, Germany. Into the grave, Netherlands

One Man Army is due for release on February 20th via Metal Blade Records.