The Jagermeister Music tour rolled back into Brixton at the end of 2014 bringing some of the best names in Ska and Punk. With Me First And The Gimme Gimmes headlining tonight was going to be everything but a sensible, civilised evening and bring Capdown and The Skints with them meant everyone was guaranteed to have a good time.

Stepping in at the last minute to replace Feed The Rhino, Drum & Bass act Animal Music (6.5) initially seemed like an odd choice to open. However it didn’t take them long to get portions of the crowd dancing around and it soon became apparent this was a great warm up for a bunch of drunk Ska and Punk fans. They might not have been exciting or particularly original but some fun remixes of songs such as Mr Brightside did their job and got people singing.

The room had filled up greatly by the time Capdown (8.5) came onstage despite their early set time and the band wasted no time getting this older crowd to act like teenagers again. Despite not being a full time band anymore Capdown show no signs of rust, their performance is incredibly tight without lacking in raw energy. The crowd match this energy but it’s not until they bust out the saxophone that the crowd really goes wild though. Even with them being second on tonight the fans treat Capdown’s set like they were headlining and this just results in everyone having a great time.

The Skints (7.5) take a much more laid back approach but their Reggae tunes are no less infectious. With this being a hometown show for The Skints it’s not surprising to see the room packed with their fans and the entire room is a sea of bobbing heads for the next hour. While their set might lack some of the excitement of Capdown before them there’s plenty of bounce and groove as well as some incredibly unique moments. Their set might run out of steam towards the end as the last few songs start to blend together but it’s not enough to derail tonight’s performance.

Finally it was time for 2014 Jagermeister tour headliners Me First And The Gimme Gimmes (8.5) to take to the stage. Decked out in matching Hawaiian shirts and white trousers the band look ridiculous and the moment open with a cover of “Leaving On A Jet Plane” it becomes apparent that ridiculous is probably the best way to describe their set tonight. They might just be a glorified covers band but Me First And The Gimme Gimmes are definitely one of the most entertaining live bands around. Covers of “I Believe I Can Fly” and a brand new cover of “Karma Chameleon” get the entire room dancing about and just wraps up tonights gig in a fun, feel good way. Another success for the Jagermeister tour which has become one of the UK’s best loved alternative tours of the last few years. 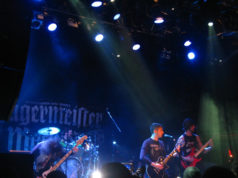