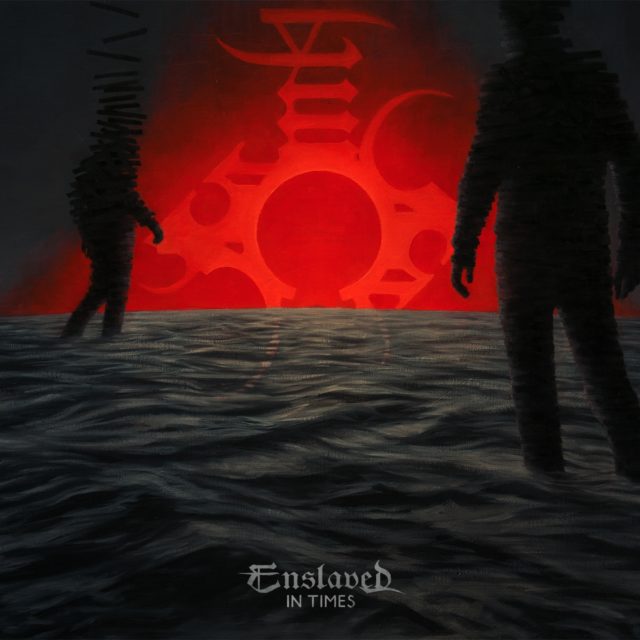 Despite originally starting out as a traditional black metal band, Norwegian five piece Enslaved have moved more towards a progressive sound in recent years. Three years on from the excellent RIITIIR, the band are back with their thirteenth studio record, In Times. Does this new offering continue the band’s progressive sound or does it return to the roots of Norwegian black metal?

Opener Thurisaz Dreaming roars into the life in an instant through Grutle Kjellson’s signature snarls accompanied with traditional black metal style riff work which suggests to the listener that Enslaved have taken a step back to their roots with their sound. However, similar to the music style of previous records, there is so much more aspects to the band’s sound than traditional black metal. The entirety of In Times contains such much music variety it makes it difficult to pin-point exactly what sub-genre the record falls under. One Thousand Years of Rain features riffs that are performed at both breakneck speed whilst title track, In Times, slows the pace dramatically through a consistent drumbeat. That’s the best quality of Enslaved, there is so much musical variety on show on In Times that it both showcases the expertise of Enslaved‘s musicianship and gives the listener so much musical aspects to enjoy. Each member of the band perform their duties to the best of their ability; Ivar Bjørnson and Arve Isdal’s riffs are exquisite and complex and Cato Bekkevold execution of blast beats is nothing short of what black metal fans can expect.

Despite the excellent musicianship, the most enjoyable and outstanding element to the record is the vocal work. Compared to other black metal bands, the harsh vocals featured on In Times replicate the style perfectly. Grutle Kjellson’s snarls roar above the blast beats and riffs which indicates that the band have not forgotten their roots in Norwegian black metal, however it is the clean vocals that are the stand out musical feature to this record. Enslaved have built on this aspect on previous records, with RIITIIR showcasing this at a high standard. It is why it is so relieving that In Times features some of the best clean vocal work to date. Building With Fire is host to a chorus that showcases clean vocals that rise above the riffs like a phoenix rising from the ashes where as closing track Daylight combines both harsh and clean vocals to make a unique mix before leading into slow intricate guitar play.

The real beauty with In Times is that every element of the band’s musical approach is so complex and intricate, that the end product is a record that is truly unique and spectacular. With the modern black metal scene becoming increasingly stale, Enslaved have crafted a record that borrows elements of progressive music mixed with traditional black metal which helps the band breathe new life into the scene. Through the eight tracks there is so much musical variety, it gives the listener a fresh experience on every listen and that in itself is a very difficult trait to achieve. In Times is truly a fantastic record and showcases Enslaved at their very best.

In Times is set for release on March 6th 2015 via Nuclear Blast Records.