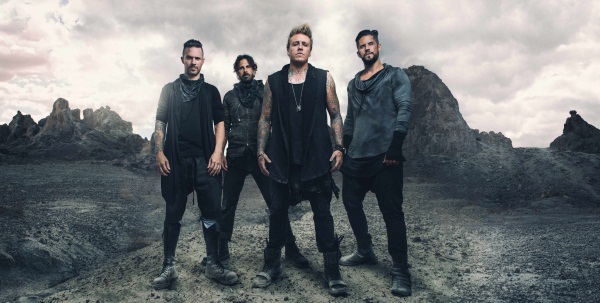 When you hear of any big tour announcements you get excited. However when Papa Roach announced their F.E.A.R. 2015 tour, the fourteen year old in me was over the moon. After having a chat with Jerry, Papa Roach’s guitarist, prior to the show (coming soon here on Rock Sins), I couldn’t wait to get into the venue.

The One Hundred (7) kicked off the show with a fusion of rock, hip-hop, rap and electronica which worked so well! Jacob, Tim, Phil and Joe set the night up well as an opening band with their energy and entertaining dance moves! Couldn’t have been easy. A night they and the audience probably ever forget!

Coldrain (9) joined the line-up all the way from Japan and it was well worth it. Masato’s vocals accompanied by Y.K.C and Sugi on guitars, RxYxO on bass and Kasuma on drums was more than exceptional. The musical skills that these own are phenomenal, if you have a chance to see them make sure you get right to the front and watch closely. The UK needs these guys back on their own tour sooner than they think.

Papa Roach (10) fulfilled everyone’s need for a good live show. In an interview prior to the tour, Jacoby said, ‘we got tricks up our sleeve for this tour so be ready, it’s gonna be off the chain!’ And he wasn’t wrong!

Opening with ‘F.E.A.R.’ the title track of the album and closing with ‘…To Be Loved’ gives you an idea of the range of tracks they set list involved. Fans were given exactly what they wanted! They played a number of new tracks off their latest album F.E.A.R. released earlier this year as well as their classic tracks such as Hollywood Whore, Last Resort and Scars.

Jacoby Shaddix’s vocals and performance were top notch. Jacoby got very involved with the crowd from surprising us all by joining them via the side entrance to the venue to crowd surfing from the barrier. Jacoby was not the only one wow’ing the crowd. Jerry, Tobin and Tony are not to be forgotten because without them Papa Roach would not be what it is.

The show definitely catered for all kinds of Papa Roach fans young and old, new and hardcore. If you were there, you would not have been disappointed!