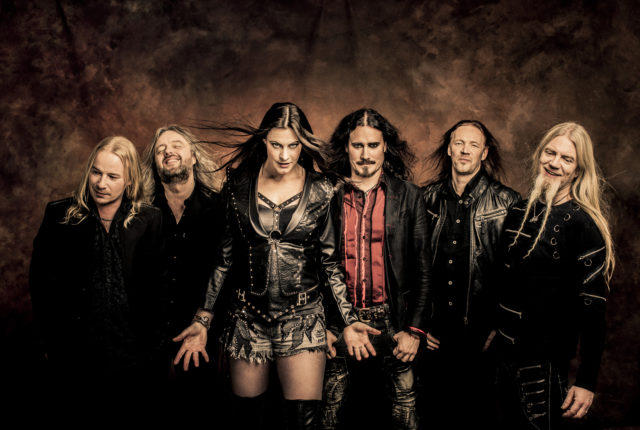 Nightwish are arguably Finland’s biggest musical export. The six piece have dominated the symphonic metal scene for over 19 years and despite numerous lineup changes the band have always managed to achieve the same level of expertise to their sound. Now in 2015, the band have only just released their eighth studio record entitled Endless Forms Most Beautiful. We speak to the band’s new vocalist, Floor Jansen, to discuss the new record, the band’s touring plans for 2015 and just why Nightwish are so popular in the musical world.

Floor: Hello how are you?

I’m very well, how are you?

Your first record as Nightwish’s full time vocalist, Endless Forms Most Beautiful, has been out for only a few days. How have you found the early reception?

Floor: Yeah, it’s been very positive. It’s been very overwhelming, a lot of people have been really blown away by it.

Were you nervous before the record came out?

Floor: No because you can’t really change anything. I mean the last recordings were done in September/October so you get a couple of months to get used to the idea that this is what it is. I was extremely satisfied with it, I wouldn’t change a note so there was no nerves!

I’d seen in a past interview that you had no involvement in the writing for this record. Was that out of respect to the other band members?

Floor: As you probably know, Tuomas has been writing 95% of Nightwish’s music throughout history and Marco had started to co-write a little bit with him. So that is how things are in Nightwish and if you hear how well written the new songs are, I was just fine with not being involved with writing. Perhaps on the next album if I write something that fits, then I’m sure they are open to it. My ego, lets put it that way, is fine with having songwriters like them writing the stuff. Plus, singing something that is written by someone else still requires creative input to actually make it come alive yknow? Whether you play a vocal line on the piano or sing it, there is creative input there that I’m very happy with.

So when it came to actually recording the songs, was it difficult to adjust to Nightwish’s style compared to bands you’ve worked with in the past?

So you are gearing up for an American tour in a couple of weeks. Are you looking forward to that?

Floor: It’s next week, I’m looking forward to it very much.

And for UK fans you have the massive date at Wembley Arena. What can fans here expect from that?

Floor: Well I can’t really tell you much at this point, it’s still so far away. But we are a band that are known to bring something live, yknow with a lot of pyro and stuff like that. I really hope we can bring that to Wembley and make it like The Greatest Show on Earth.

Yeah definitely! That track in particular is an absolute beast, being 24 minutes long. Do you think that makes the record really stand out by having a song that has so many different elements to it?

Floor: Yeah I think so, it’s definitely not a standard song. In modern times you don’t really see too many artists making songs like that but it’s almost not a song, it’s more like a classical aria. It’s a story that takes its time to take course and it doesn’t have a standard song structure. I think it’s great as a lot of songs already bring a lot of imagery to the listener and of course you listen with your ears. It seems to bring out pictures, colours and emotions – I think this is just a grand finale of all that from previous albums. So it does seem to fit somehow.

Do you think that is the appeal of Nightwish?

Floor: I think so yeah. It triggers your imagination and it’s cool that with this album it tries to trigger not just your imagination, like what you can imagine that isn’t real, but can you imagine how awesome it is what is right there before you that is real. Yknow like how birds migrate or how the world starts to grow again after winter. There are so many small miracles in nature and in this world and how things just are, like the magic of reality. It’s kind of cool to have this level of ethicalism in the real world and in this music now. That is unique for this album.

It definitely shows as I’d say Nightwish are Finland’s biggest musical export. Why do you think Nightwish are so popular? Not just for metal fans but for music fans in general?

Floor: Well I think Nightwish are not a metal band to start with, it has enough elements of it but it’s not typical which some metal fans may find confusing. But for music fans indeed we can grow into the folk corners, we have a pop edge, we have full on rock and then we do the double bass headbang part. And it’s so diverse. Why does this work? I don’t know, for me it is in the same questions as why do you like red? Or why do tulips only blossom in Spring? I don’t know haha!

It just seems to be that way?

Floor: Yeah, for sure.

It’s not just Nightwish but it seems that a lot of Finnish bands are relished in the rock world. All these bands, including Nightwish, have this complexity to their music, do you think that’s why they are so popular?

Floor: In all honesty, I don’t know.

I know the new record has only just come out, but will you have a more active role when it comes to writing for the next record for Nightwish?

Floor: I don’t know, like I said in a previous answer if there is a part I write that seems to fit then yes. But if not, I’m just fine with the way things are because it is so good!

So with the American tour and the date at Wembley, what else can Nightwish fans expect for the rest of 2015?

Floor: We start with six weeks in North America so Canada as well, then we have a couple of really cool shows here in Finland. We start off with a big arena show in one of the band’s closest home town, the town I live in right now. We have a cruise coming up where we take off from one of the harbours here to Sweden, and those boats are really small so it will be a very exclusive thing for fans. Then we hit the festival season, we have a couple more of our own shows here in Finland, then we go to South America or at least Rock in Rio. That has been announced now and that is a very exciting festival to play. Before coming to Wembley we have a full European tour with Arch Enemy and Amorphis.

Well it seems like you are going to be very busy for the rest of the year then!

Well I really appreciate your time for talking to me, thank you

Floor: Thank you and maybe see you at the end of the year!

Endless Forms Most Beautiful is out now via Nuclear Blast Records.