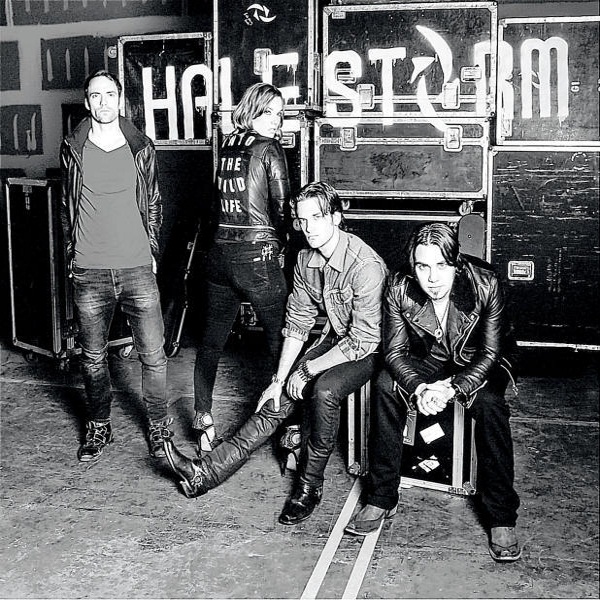 Halestorm have spent the last three years on an almost meteoric ascent up the ranks of the rock world. Thanks to their worldwide smash hit album The Strange Case Of…, a brilliant live show and having hit song Here’s To Us featured on the worldwide TV hit Glee, they’ve gone from playing clubs to a few hundred people to headlining theatres holding several thousand. Now, three years on from The Strange Case Of comes Into The Wild Life, Halestorm’s third album. For many bands album number two is referred to as “the difficult second album”, but in this instance the question is, have Halestorm managed to pull off “the difficult third album”?

The answer is just about. The album opening track Scream feels out of place, certainly deserving of a place on the album but lacking the shotgun blast impact that Love Bites (So Do I) gave The Strange Case Of. Second track I Am The Fire on the other hand is full of life and energy and with a positive lyrical message throughout, it is one of the stand-out moments on the album. Two of the already released songs from Into The Wild Life also make very good first impressions.

Amen is crammed with brilliant vocal hooks throughout, drawing the listener in and it’s almost guaranteed after a couple of listens the song will be permanently lodged in the listeners brain. On the flip side, Mayhem shows a different side of Halestorm with arguably their heaviest song to date, and it works very well for the most part though some Halestorm fans may not enjoy this side to Lzzy’s vocals though it is great to see Ms Hale pushing her already exhaustive range even further.

Where Into The Wild Life suffers somewhat is once you get past the highlighted songs, the quality fluctuates and as a result the album does not flow particularly well. Apocalyptic will be lapped up (and already has been) by US rock radio audiences but lacks the distinctive impact that a listener expects from a Halestorm song, something that could be said of several other songs on the album. What cannot be faulted whatsoever (once again) is Halestorm’s leading lady, as Lzzy Hale’s vocal delivery throughout is of the highest order.

Halestorm have ultimately been victims of their own success. Like many bands before them, they been left in the unenviable position of trying to follow an album that is held in such high esteem that they were unlikely to ever match it. Into The Wild Life is a very solid effort that will consolidate Halestorm as one of the best hard rock bands to emerge this decade and there is an awful lot more to come from Lzzy and co in the future.

Halestorm’s Into The Wild Life is released on the 13th of April 2015 in the UK on Atlantic Records.

Halestorm’s Josh Smith On Playing Download: “It felt like a right of passage and it still does”