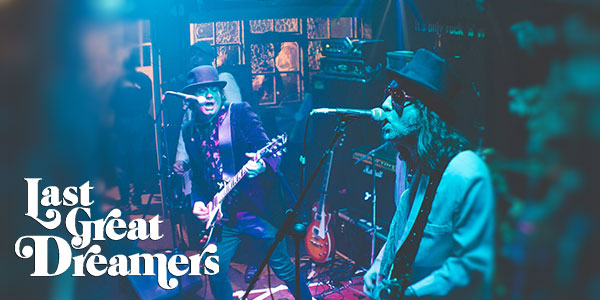 After disbanding in disastrous circumstances well over a decade a ago, London dandy rockers Last Great Dreamers are back! Nick Holmes went to see what all the fuss was about…

Before the headliners’ return to the seaside, first on were young local band Doors To Manual (7). They play a funky kind of indie rock with echoes of Reef and “Second Coming”-era of The Stone Roses. In fact their last song featured a pounding drawn out close similar in vibe to the Mancunian legends’ “I Am The Resurrection”. A loud and enthusiastic section of fans called for more, but sadly left straight after the band had finished. Their loss.

In a time when the most unlikely of bands have reunited for shameless pension fund tours it is heartening that some are doing it for another reason. The sheer love of playing music together.

Back in the mid-90s Last Great Dreamers (9) caused quite a fuss, pretty much having a residency at the legendary (now sadly gone) Marquee club and being voted the “next big thing” in Kerrang! polls. The magazine’s then editor, Geoff Barton, openly did his bit to push them at anyone who would listen. Then it all fell apart. Poor record company support and a series of tragic deaths among those close to the band led to them going separate ways.

Almost 20 years later after a series of fortunate events and coincidences, the Londoners decided to give it a second go. They recorded a new album and have now started to play low-key gigs, of which this was one.

It’s clear from the start the foursome are genuinely delighted to be back together and that enthusiasm was infectious. Their songs, filled with pop-type hooks and big choruses, reminds of two other great British rock n’ roll bands, Dogs D’ Amour and The Wildhearts. That is meant as a big compliment.

The set flew by, with diminutive singer/guitarist Marc Valentine becoming increasingly animated and throwing theatrical shapes while managing to keep his bowler-type hat on! Highlights included “Far From Home” and a new faster punky song with one part reminiscent of Kim Wilde’s “Kids In America”!

“We played the Gander (revered biker pub across the road, now a chain pub) 23 years ago! Was anyone there?” asked Marc. When a few beer-soaked croaks responded, he threw back “You’re old fuckers like us! Haha!” He also dedicated a song to someone called Dimitri, apparently absent because “his puppy is sick.”

With at least one band member’s mum looking on they hit the home run with their signature “Last Great Dreamer”, a catchy glam rock stomp with cool harmonised vocals.

After going through what must been a series of nightmares back in the day the Last Great Dreamers surely deserve better fortunes this time round. Definitely older, probably wiser and exuding proper rock n’ roll spirit they are more than worthy of your attention. Dare to dream! 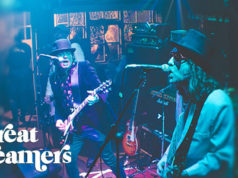 An Interview With Last Great Dreamers Guitarist Slyder Smith: “Fans are telling us we’re putting on the best shows we ever have now”