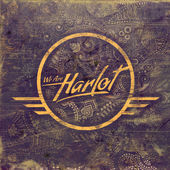 We Are Harlot signifies a turning point in their lead singer, Danny Wornsop’s career. Harlot started as a side project to his former band, metalcore bruisers Asking Alexandria, yet before the release of their debut album he left AA to work on this new project full time. That decision ups the importance of this album tenfold; We Are Harlot has become Worsnop’s make or break moment. So, how does his 21st century take on hard rock fare?

It’s known that the singer split from his former band mates on good terms and – whilst it must have been difficult to leave his friends of eight years – he has never sounded happier nor more comfortable on record. Whilst a few tracks, such as “Denial” feature the harsh vocals the singer used frequently with Asking Alexandria, We Are Harlot has Worsnop focusing much more on his melodic side. He’s blessed with a genuine rock star voice that has a real grit to it that helps to sell his genre change. That said, hard rock isn’t exactly a surprising route for him to go down; Asking Alexandria always favoured a hair metal aesthetic and they embraced their influences on a couple of tracks; 2011’s To The Stage, for example, features a lot of the rock n roll swagger present on the Harlot album.

We Are Harlot isn’t all about Danny Worsnop, however. A lot of the album’s sound comes from its guitar player, Jeff George, formerly of Sebastian Bach. George is a perfect fit for the band, with his buzzsaw riffs and blues influenced solos really making the classic rock style come to life. After a number of years playing for Bach, We Are Harlot has really allowed George to flex his creative muscles, and at his best he crafts some electric, rabble-rousing riffs that stick in the mind, even after just one listen.

Despite this, We Are Harlot does suffer from repetitiveness issues.  It doesn’t offer much variation throughout the album; there’s a lot of fast paced bangers, a couple of mid tempo rockers and the traditional power ballad. Wornsop and co deliver a thrilling, fast paced rock and roll album, but there’s not a lot of substance beyond that.

The album really does sound like Motley Crew updated for a 2015 audience; the production is tight without being restrictive, and the vocal performance is more than impressive. We Are Harlot are an odd project; rock supergroup The Dammed Things, featuring members of Fall Out Boy, Anthrax and Every Time I Die, are probably the closest possible comparison. Like The Damned Things, Harlot have a swagger, a sense of fun and rock and roll rebellion that has been missing from a lot of rock music for a while.