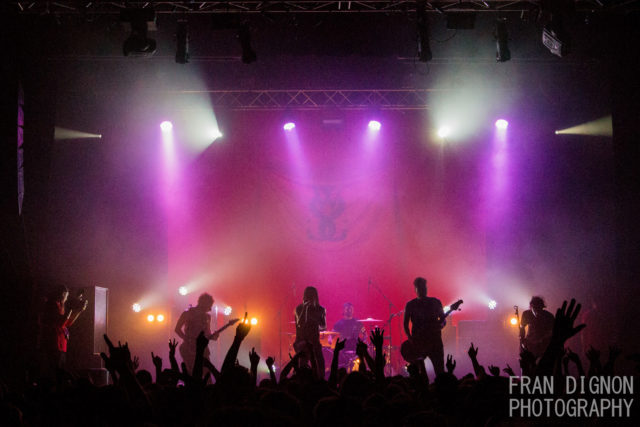 After both While She Sleeps and Cancer Bats had a quiet year in 2014 with only a handful of shows between them, they decided to make their big return this year with a massive co-headline tour. With tonight’s Manchester show being completely sold out it was sure to be a special one for both bands.

First up came Oathbreaker (7) who certainly prove to be an interesting choice for an opening band. Blending elements of black metal, punk and post-rock provide something so relentlessly dark and heavy. Vocalist Caro Tanghe spends the entire set hidden behind her hair and a sense of mystery to the band. While she doesn’t say a word to the crowd for the entire set she is constantly engaging thanks to her unique stage presence and fantastic vocals. Still its clear Oathbreaker aren’t for everyone judging by the number of confused faces in the crowd. Despite this it was a very impressive opening set from them.

Hundredth (8) on the other hand were far more accessible. Within seconds of opener Free Mind / Open Spirit a pit is open and fist and feet are flying through the air. The entire band rarely stop moving as they jump around the stage and their passion is felt through the songs. New song Unravel is great taste of what’s to come from their new album released later this year but it’s set closer Weathered Town that is easily the highlight. Fans charge to the front to join Chadwick  Johnson briefly making this large room feel like an intimate hardcore show.

Following these two impressive support slots, it was time for tonight’s first headliner. Exploding on stage with Arsenic In The Year Of The Snake, Cancer Bats (10) waste no time getting the entire room moving. It’s an immediate reminder that despite their time away, Cancer Bats have not lost their touch when it comes to putting on a killer live show. Satellites sees the first crowd surfers crashing over the barrier while Lucifer’s Rocking Chair results in massive amounts of headbanging. Liam Cormier is like an excited child for the whole set as he bounces around the stage with a seemingly endless amount of energy. Fan favourites like Bricks & Mortar and Scared To Death keep the energy from the crowd up, there is never a single dip in the entire set. Still it’s the inevitable cover of Sabotage and the monstrous Hail Destroyer that get the best reaction of the whole night. What makes tonight’s set so special is that Cancer Bats have never been a band to have massive mainstream coverage but through constant hardwork and touring the band are now able to pack out rooms this big and its clear how much this means to them. For a band who perhaps thrive doing intimate club shows, tonight Cancer Bats prove they can completely destroy rooms this size.

Even after Cancer Bats amazing set the night was not over. Before While She Sleeps (10) even came on stage chants of “WHILE SHE SLEEPS” erupted from the crowd, its been a long time since While She Sleeps have played headline shows so the excitement is understandable. Once the band finally arrive onstage and kick in to New World Torture this excitement is completely justified. Tonight While She Sleeps are better than they’ve ever been. It’s helped by the fact that new material from their album Brainwashed is the best stuff the band have released. Tonight’s set is perfectly balanced between new material and older songs. The likes of This Is The Six and Seven Hills are played unbelievably early and get an insane reaction as almost every fan in the room tries to crowd surf towards Loz Taylor. While She Sleeps live performance reaches an intensity that very few bands can match, their performance completely unpredictable but they remain incredibly tight throughout. This reaches a ridiculous climax as Loz dives off the venue balcony during Crows before making it back to the stage completely unharmed, much to the relief of guitarist Mat Welsh. Finally Four Walls wraps up their set with a huge singalong. Tonight will certainly go down as one of the best sets of While She Sleeps career.