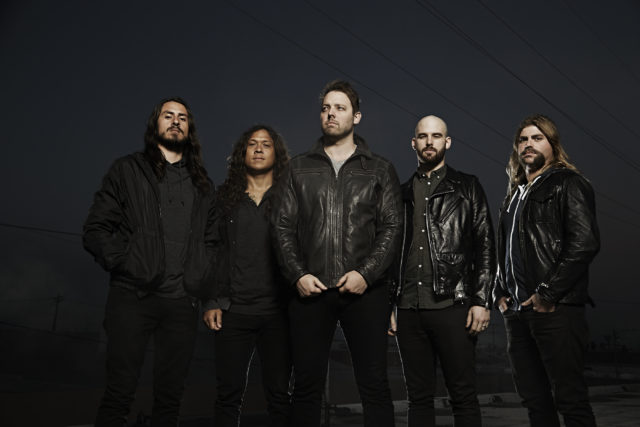 From the ashes of As I Lay Dying and Oh, Sleeper Wovenwar have been hard at work building up their reputation. With the band comprised of the former As I Lay Dying members and Shane Blay from Oh, Sleeper, Wovenwar have a new image and a new sound. We speak to Phil Sgrosso ahead of the band’s first headline European tour to discuss the origins of the band, the upcoming tour and Wovenwar’s musical direction.

Your debut record, Wovenwar, has been out for just about a year. How have fans taken to the record?

Phil: Pretty well! With any new band it takes time building up a following but we are fortunate enough to have a lot of fans cross over from As I Lay Dying and Oh, Sleeper (Shane’s previous band). So it’s good, it’s picking up and we are just keeping busy with a lot more tours and getting our name out there!

With Wovenwar, the majority of the band is members from As I Lay Dying. Was the switch difficult?

Phil: I think it was refreshing in a way, it seemed like we needed a little more spark. We’ve been doing the same sound for so long and we were trying to figure out ways to keep growing and expanding with our range of sound. This felt like the right fit for us for where our heads were at the time a couple of years ago.

Wovenwar has a lot of musical style which is very similar to As I Lay Dying. Was that always the aim for Wovenwar?

Phil: Well yeah, I think that it is a blend of both. If we did something too far off the wall then I think a lot people would be confused. We wanted to keep it a little familiar yet adding new elements gradually. But there are songs like Father’s Son that our previous band couldn’t have done. I think having a lot of clean vocals lends itself to a different writing style.

Is that writing style what you aim to continue on your next record?

Phil: Definitely! I’d say yes, and we also want to add more elements with every album and keep people on their toes and write things that we’re inspired by. But, like I said, not be too random or too off the wall with things that doesn’t have a flow yknow?

The last time you guys were in the UK was in October, on a supporting run with In Flames and While She Sleeps. Are you looking forward to getting back to the UK?

Phil: Absolutely! It’s probably taken a lot more time to build up our following there as opposed to mainland Europe. But, we’ve always been excited to be there, we are big fans of English bands. Playing there is always exciting for us and playing anywhere foreign is always exciting!

Phil: It’s different in mainland Europe. Germany is definitely very animated, the shows are always great there whether it’s festivals or clubs. In the States it’s the same way but it can be different from state to state with how the crowd is. Either way, it’s just great to be playing.

I think that was always the aim when the As I Lay Dying situation happened, a lot of people wondered what everyone else was going to do. Wovenwar has always been a project that was in the works so when the situation with Tim happened, did you immediately think “let’s start Wovenwar”?

Phil: Yeah, Wovenwar wasn’t anything before As I Lay Dying had ended, there was just some musical ideas being passed along between a couple of the guys. And that’s how keeping in touch kind of worked out for when everything that happened with As I Lay Dying. It made it an easier transition into Wovenwar. We had been in touch with Shane, he was definitely interested doing another band because Oh, Sleeper was starting to wind down and not be as active.

So with the European tour, that is a co-headline run with Sylosis. So how come you’re are doing a standalone headline tour for the UK dates?

Phil: They (Sylosis) were unable to do dates in the UK because they have previous obligations I think with some other shows in the year. We played at the London Underworld late last year and we’re coming back and playing again. I think we are just building things back up just being on our own as a headliner. If some support tours come along the way that makes sense for us then we will definitely do those. The In Flames tour definitely was perfect for us.

With the UK dates with Wovenwar being the headliner, will that be a different performance as opposed to when you co-headlining with Sylosis?

Phil: It’s going to be pretty much the same. We only have one album so it’s not like we can play an hour and a half but we can definitely play as much as we can! We feel that either show, whether it is just us headlining or co-headlining, it’s still going to be us putting on our best show!

So what can fans expect from the UK tour?

Phil: A different setlist that we haven’t done, we’ve been playing the same setlist for the past few tours because we have been in different areas. But as we think of this as a headliner we are re-structuring a lot of things and trying to improve upon the flow of the show will go for the fans. We definitely feel that we are improving with that.

And really my last question is what else can fans expect from Wovenwar for the rest of the year?

Phil: We are going to start writing maybe even during this tour and into the summer. We have a US tour that we will be going out on with some good friends of ours who put on this tour. I can’t announce it yet, I have to wait for them to announce it but we are pretty excited to play some big rooms in the Fall time of this year.

Well best of luck for the rest of the year and I’ll hopefully see you at the Manchester show!

Phil: Sounds good man! Thanks for the interview, take care.

Wovenwar hit the road for a headlining tour with As Lions as support across the UK late next week on the following dates: