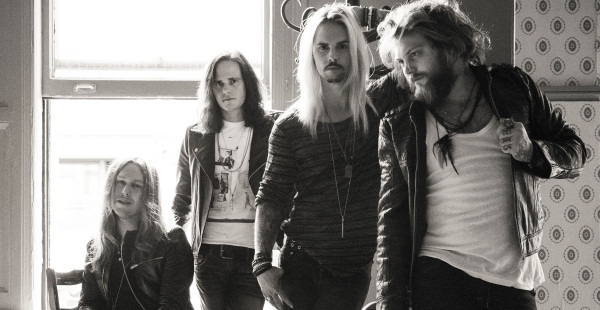 Currently making waves all over TV, radio and the Internet with tunes like The One and Dancing On Nails from their hugely successful self-titled debut album, We Are Harlot have recently announced plans to expand their June UK trip.

Originally Danny Worsnop was bringing his “new” bandmates to the UK just to appear at the Download Festival. However those plans have now been considerably extended. The day after Download We Are Harlot will be taking to the stage at the Metal Hammer Golden Gods Awards in London. They’ll zoom up north of the border for a show at Glasgow’s Cathouse on Tuesday 16th, before returning to London on the 17th for a show at Islington Academy. Confirmation of their full schedule is below:

Tickets for the Glasgow and London Islington Academy dates (as well as Download Festival) are currently on sale from Live Nation at www.livenation.co.uk and various other online ticketing shops. Over to We Are Harlot’s singer Danny Worsnop for his thoughts about his homecoming jaunt:

“Britain! Papa’s coming home! I am pleased to announce that I, and the hurricane that is the Harlot boys, will be hopping over the pond to rock and roll with you all. We will be headlining at the Cathouse (Glasgow, Scotland) and the O2 Islington Academy (London, Englandiatonville). Our excitement is indescribable and uncontainable! Get your sweet, sweet hineys on over to www.weareharlot.com and get your tickets now, before they’re all gone!”

We Are Harlot’s video for Dancing On Nails can be seen below for those unfamiliar with the band (or for those who just want to enjoy a great song):

Further updates from the We Are Harlot camp will be available here as and when we get them. Their self-titled debut album is out now on Roadrunner Records. The Rock Sins review of the album is available to read here.