Wrapping up their recent headline tour, Monuments returned to London. With this being a hometown show for most of the band it was bound to be a great end to the tour. With fans packing into the Borderline long before Monuments set, it’s clear people were excited for tonight.

Kicking things off were newcomers Murdock (7), who blended elements of tech-metal with hardcore and punk. This helped them to stand out against other tech-metal bands. Despite their early set time The Borderline was already busy suggesting that Murdock are certainly grabbing people attention and whilst the crowd might not go wild during their set, everyone remains constantly engaged. Some of the more technical riffs might be lost a bit tonight due to poor sound but it isn’t enough to ruin their set. Murdock certainly show a lot of potential tonight.

Following this, No Consequence (7) deliver a more traditional tech-metal set, which certainly isn’t a bad thing. No Consequence blend heaviness with more  sophisticated prog moments all whilst packing plenty of groove into their riffs. The setlist is heavily focused on the new album but it’s the older songs that cause the crowd to start moving. Unfortunately again the venues sound doesn’t do the band any favours particularly during the more technical moments, still again this isn’t enough to derail what is a very impressive set from No Consequence.

Finally it was time for Monuments (9) who wasted absolutely no time tonight, within seconds of the band starting the packed out venue are jumping around and singing along at the top of the lungs. Vocalist Chris Barretto controls proceedings with ease tonight and based on his smile, he seems overjoyed by the crowds reaction. The band storm through a set heavily dominated by material from their brilliant second album The Amanuensis. “Garden Of Sankhara” provides an early highlight as Chris brings out a saxophone adding another layer to the music. The rest of the set is dominated by technical riffs and some of the biggest grooves ever. Combined with Chris’ amazing vocals, Monuments put on an incredible performance tonight. Again the venues sound system seems intent on trying to ruin things tonight but Monuments continue to power through a fantastic set. When Chris tells the crowd how difficult being in a band is but it all being worth it for nights like this it is very clear how important shows like tonight are for the band. Kicking back in with “Regenerate” the band cause even more chaos as everyone in the room crouches down before jumping up in unison. Monuments wrap things up tonight with “Degenerate” which leads to a mass stage invasion by fans and the support band. Tonights hometown show was certainly a special one for both the band and the fans and one that neither will forget any time soon. 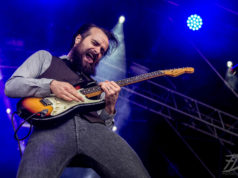