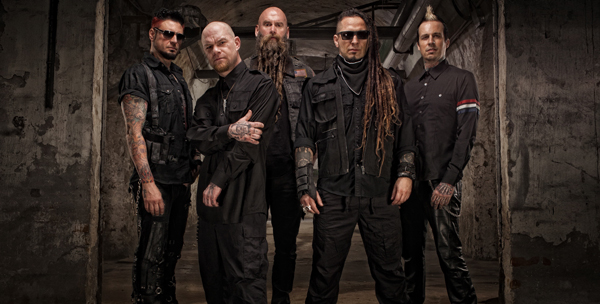 Five Finger Death Punch have already conquered the metal world in America and are well on their way to doing so on this side of the Atlantic too. Ahead of their huge main stage slot at last month’s Download Festival 2015 (of which you can read a review right here) we caught up back stage with FFDP’s man behind the drum kit Jeremy Spencer to talk about his autobiography, Rob Halford, their new album and various other things, so let’s get straight into it.

This is Jamie from Rock Sins and I’m here with Jeremy Spencer from Five Finger Death Punch! Welcome back to Download.
Jeremy: Thanks very much man.

This is your biggest appearance here at Download so far, most high profile and the highest position on the bill, you must be excited?!
Jeremy: It’s SO exciting. We’ve always had a great time here, the first time we came here I was overwhelmed with so many people, and now it’s going to be even more. The people here are always great, and the weather *looks warily to the sky*…is holding it together for us *laughs* so we’re hoping its going to be a great night.

You have an autobiography now out which could be described as an interesting collection of tales (Jeremy laughs). What gave you the inspiration to write the book, was it going through rehab?
Jeremy: After I got out of rehab I had a lot of time on my hands, and it was different time. I wasn’t used to having that time being focused and sober so I was thinking what was something positive I could do with my energy. So I just started writing about my life and the earliest memories I had of it and it ended up becoming a really good way to process stuff and deal with stuff and release things that I had never really done before. I started getting thousands of words together and I would read it back and think “some of that shit is pretty cool” so I sent it to my Dad and he thought it was really funny and cool, and then he was like “why don’t you let me help you tighten it up in some spots” because it’s pretty raw and unfiltered and “if you release it this way you’ll probably be hated by everyone” *laughs*. So he did and then I sent it to management and they really liked it. So then they helped me get a book deal which wasn’t something I was planning on doing, it just kinda happened!

Now that the book is finished and out there, do you actually miss writing?
Jeremy: Nah, definitely not. It’s a lot of work man! It took a couple of years really, the first draft took six months but you have to do so many revisions. So when you finally put the book out…I couldn’t believe it, it charted on the New York Times best sellers list. I was totally shocked and I just kinda laugh about it, I’m not even a writer and it just happened! So now the paperback edition is coming out this next week which is more affordable for anyone who wants to read it but didn’t have the money to shell out first time around.

You did something very interesting with the book by donating a portion of the profits from the book to the Association of Addiction Professionals which was a very cool thing to do. Was that (association) something you felt very strongly about?
Jeremy: I went to rehab at a younger age as well so I’ve kinda been around that a few different times and I’ve seen what those professionals go through. They saved my life and helped put me in a good place mentally and they’ve done a lot for me that’s positive so I think that any help you can give back to people that do that for a living and to bring awareness, I think it’s a positive thing and it needs to happen.
Rock Sins: Fantastic. Do you have any idea how much money the book has raised for them?
Jeremy: You know I really don’t. The book is selling at a decent rate, things have changed so much sales wise with music and books and everything just because you can click online and steal it. And there’s a whole new generation of kids who don’t know what the concept of buying a record is..”What do you mean you PAY for music?!”.

With that having been said you guys have still managed to achieve a lot, not least some gold (certified for quantity of sales) albums…
Jeremy: We’re fortunate man, we’ve had a fanbase that’s been with us since the days of MySpace even before we had a record deal. So they’ve been with us every step of the way and they look forward to our records and thankfully keep buying them! So we’re blessed man, we don’t take it for granted and we know it could change at any second because sales are just declining all the time. You look to make that up in other ways, we tour a lot – obviously a lot of bands do that, but even the price of touring has gone up. It’s tough to make a living doing music, way different than it used to be. But we’re in a position where we’re doing ok, we live good lives and we’re able to go home and have decent homes to live in and we’re happy.

I know in the US you’ve been doing the whole “demand the tour comes here” interaction with your fans with voting for locations for the tours and you’re also doing it with your European tour that’s just been announced, have you found that that is something that’s working well?
Jeremy: It’s cool and it’s different. A lot of people are enthusiastic about it trying to get us to come and play a show in their city. The only downside is if your city doesn’t win then people are disappointed. But you can at least say we’re just starting out so we may be back, it’s not the end of the world just yet. But I get why people get disappointed and frustrated, we’re trying to make it work for everyone.
Rock Sins: At least that can potentially help you guys to plan a second run of dates later on on an album cycle or something like that.
Jeremy: Yeah exactly and we’re just getting started. The important thing is to start. It’s going to be a long cycle and big campaign so we will try to spread it out and make everyone happy if we can.

As most people already know there’s a new Five Finger Death Punch album in the pipeline, will it be out in time for the tour?
Jeremy: Absolutely. It comes out everywhere September 4th. It’s called Got Your Six, it’s our sixth album and we’re really excited. We’ve been cooped up in the studio making it for so long and we’ve been living with the songs for so long we just want to share them and now it’s getting ready to happen.
Rock Sins: Are we getting any sneak previews today?
Jeremy: No, because we haven’t dropped the single yet. We don’t want the first thing people hear to be a youtube video from somebodies phone where it sounds like crap.

Fair enough. Obviously one other possibility is that you guys are playing before a certain legendary British metal band called Judas Priest so is there any prospect in Rob coming to join you guys for Lift Me Up later?
Jeremy: I certainly hope so! It’s kinda up to him, he’ll come in and be like “Hey man, tonight is the night!”. Seriously he is the best guy ever and we hope it happens and if it happened here it would be fantastic, but I’m not too sure if it will or not.

One last very important topic – the show you’ve just announced here in the UK in November (at Wembley Arena) with Papa Roach is your biggest UK show yet, your first arena show here, that is a pretty big deal.
Jeremy: So exciting man! When it was first brought up we were like “you’ve gotta be kidding” and now it’s actually happening. We’re so over the top excited.
Rock Sins: That’s a venue where you supported Avenged Sevenfold less than two years ago so obviously you had a taste of it then and it must be cool knowing this time around it’s for you guys as headliners.
Jeremy: Totally man. Every time we come here it’s been getting bigger and bigger and now this is the biggest!
Rock Sins: Your first show here was at the Islington Bar Academy to like 150 people in the snow and that was only six years ago. It’s amazing to see how it’s grown in a relatively short space of time.
Jeremy: Absolutely, as you say just from a couple hundred people to several thousand, we’ve been very fortunate man, we can’t wait for November.

Jeremy Spencer’s autobiography, “Death Punch’d: Surviving Five Finger Death Punch’s Metal Mayhem” is available to buy in both hardback and paperback at all good book stores now. You can also pick it up from Amazon at the following link – https://www.amazon.co.uk/Death-Punchd-Surviving-Finger-Punchs/dp/0062308106.

Jeremy Spencer and the rest of Five Finger Death Punch will release Got Your Six on the 4th of September through Eleven Seven Music in the UK, Europe and Australia, and Prospect Park Records in the US. They will return to the UK as discussed for a massive co-headline show with Papa Roach at London’s Wembley Arena on the 28th of November. Tickets for that show can be picked up at Live Nation on the following link – https://www.livenation.co.uk/event/678983/five-finger-death-punch-papa-roach-tickets