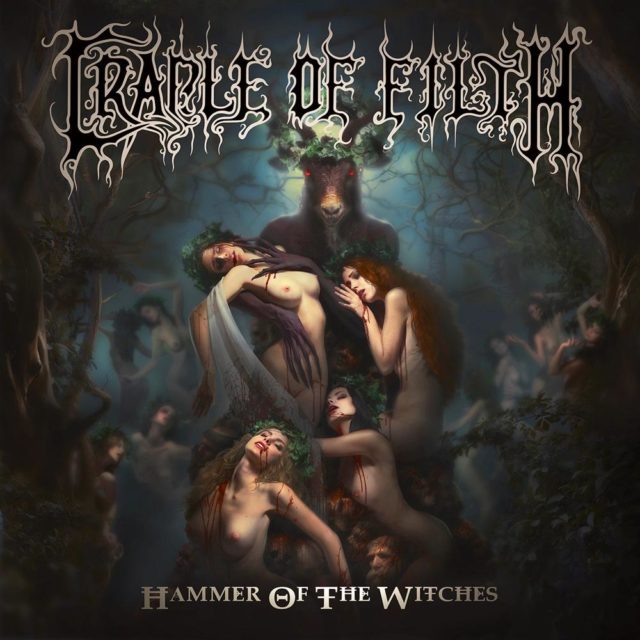 Cradle of Filth. Named by Noel Fielding (through his character Richmond Avenal) as “one of the best contemporary darkwave bands in the world” in The IT Crowd, the group have struggled to justify such a title in recent years with constant lineup changes underpinning lacklusture songwriting and poorly received attempts at experimentation. Now, though, Dani Filth has brought in two new guitarists to bring the band back to the gothic extremity that made them a household name in black metal at the turn of the century.

The band’s formula for album structure hasn’t changed much: Symphonic intro track followed by fast paced opener, but in this instance the opener, “Yours Immortally…” is a truly blistering affair which, from the opening harmonies between the guitars and keyboards, makes it perfectly clear that this new lineup has a point to prove and intends to silence a few critics along the way. It can be argued by many that despite the reputations of previous members like Paul Allender and new Mayhem guitarist Charles Hedger, the guitars have never been the strong point of Cradle of Filth’s music, with the symphonies and drumming often providing the majority of the songwriting oomph. However the recruitment of new duo Richard Shaw and Marek ‘Ashok’ Šmerda seems an inspired decision to truly reinvigorate a seemingly stagnant band which has experienced something of an overhaul since previous album “The Manticore and Other Horrors”.

The band’s penchant for extremity juxtaposed with melody and majesty is really given room to breathe in this new environment, and throughout the first half of the album the band refuses to relent on its symphonic black metal approach and slow things down. The singles released before the album’s release were no flukes and fit seamlessly into the overall feel of the album and we’re treated to some of the best  solos of the Filth’s discography and the best vocal performance from Dani in years. Yes, the banshee wails are still there, and will still continue to divide opinion among listeners, but instead of being a distraction they’re utilised more sparingly as part of the music, with much greater results. By the middle of the album and “Blackest Magick In Practice” the gothic elements are allowed to present themselves more clearly and yet they aren’t able to take away from the momentum they have by this point. The new keyboardist Lindsay Schoolcraft’s clean vocals complement the more gothic shift in the second half of the album quite well, particularly in “Right Wing of the Garden Triptych” and make sure there’s always something different around the corner for listeners to prevent everything sounding too similar as the album blisters towards its climax.

Yes, there are still problems in this album. The symphonic elements are still as overblown as ever and may make tracks such as “Right Wing of the Garden Triptych” a little too much for some listeners who would prefer a more restrained symphonic metal album, while some of Schoolcraft’s more spoken moments seem like they may be trying too much to stand out and make an impression in the chaos surrounding them, completely messing with the dynamics of the songs they feature in. However, these are only minor issues in the grand scheme of things and considering how much Cradle of Filth have improved overall on this album, these are only minor flaws which one will hope they’ll slowly iron out as they return to the path they laid out in their earlier career.

Put simply, this is Cradle of Filth on the very top of their game, and by far their best effort since “Midian”. Those who have been turned off the band in the past 15 years may yet have a reason to come back to them and have hope for the future if this lineup can stick.

“Hammer of the Witches” is out now via Nuclear Blast.