Yorkshire rockers Glamour Of The Kill have joined the glut of mid-level British rock bands who’ve decided to throw in the towel in the last eighteen months. Earlier today the following statement was posted on the GOTK Facebook page (statement follows in full):

After 10+ years of writing, recording and performing the time has come for us to bring GOTK to close for now… Whether or not we revisit this in the future is undecided, but as things stand we have no plans to write, record, or tour.
You only have to look at the number of great bands that have also recently decided to call it a day to get an idea of what a sorry state the music industry is in, and we are no exception to this.
For longer than we can actually remember we have been playing music together, and have been fortunate enough play shows to a very large number of people across the world. Despite this, music has been no way of us affording to live, pay bills, or do anything functioning human beings do, and the massive cost associated with touring internationally, more often than not means putting every single penny we have made back into everything else we have done.
It has come to a point where we need to take a step back from this, and focus on other careers just to allow ourselves to get by.
From the bottom of our hearts we would like to thank every single person that has bought our music, come to a show and sung their heart out, bought merchandise, got behind last years kickstarter, and generally helped us sustain GOTK to this point. Without your help and support we wouldn’t have made it this far and been able to do what we love for so long.
We’d also like to take this opportunity to thank every single band, crew member, and industry professional that has supported us. You have made the journey so much fun and helped carve us into the well formed pieces of shit we are today.
It is with heavy hearts we must bid you all farewell.
Davey/Chris/Mike/Ben
Glamour of the Kill

Glamour Of The Kill were due to appear at next month’s Havoc Fest in London which was being headlined and curated by Fearless Vampire Killers. FVK have offered refunds to anyone no longer wanting to attend due to Glamour Of The Kill’s cancellation. Any further updates on this story will be covered here at Rock Sins as they develop. You can also keep an eye on the Glamour Of The Kill Facebook page at https://www.facebook.com/glamourofthekill. 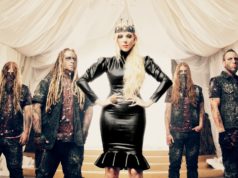 An Interview with Chris Howorth of In This Moment: “She’s our singer, so I’m not worried about any of it. I support her and...

In This Moment live at The Garage, Glasgow 28th February