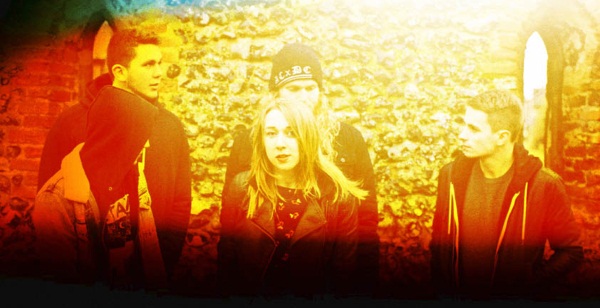 A section for focusing on up and coming new bands has been long overdue here on Rock Sins so we’re delighted to kick it off with Woking post-hardcore noise merchants Employed To Serve. We caught up with their singer Justine Jones to introduce us to the band, find out a bit about them, and just why she thinks Mr Burns is the best Simpsons character (not that we would disagree….):

Welcome! Please introduce yourselves to our readers.

Hi we’re Employed To Serve, we have a new album out on Holy Roar Records. We’re influenced by bands like Norma Jean, Botch and Seven Angels Seven Plagues.

Please tell us a little bit about the history of the band.

We started off as a two-piece consisting of myself (Justine) and Sammy the guitarist. Sammy would program the drums and record the guitar himself and I would shout over the top. We eventually wanted to make it a live band so we got Robbie in for drums and Jamie and James joined on bass and guitar soon after.

I guess it would have to be a tie between James and Robbie, but we all joke about really.

In one review they said we sound like ‘seething rage and almost unrelenting aggression’ I quite like that description, so we’ll go with that!

You’ve recently put out a video for the song Watching Films To Forget I Exist, it’s not exactly your standard “performance” music video, can you tell us a bit about the thinking and ideas around it?

Sure, the premise of the song it about people who immerse themselves in films so we thought it would be a cool idea to use tour footage from our tour with Renounced in January and mix it with scenes from cult films. We added effects to the video after to make it look like an old VHS.

Is that song typical of what listeners might find on your new album (Greyer Than You Remember)?

Yeah definitely, there are some grooves throughout the album and some slightly odd time signatures… I feel it encapsulates the album well.

Speaking of the new album, what inspired the title?

The general theme of the album is about people not pushing themselves hard enough to achieve what they want in life so they just settle for second best and stick to a situation they hate. ‘Greyer Than You Remember’ is about bumping into an old friend who had so much potential and they let it escape them over time. Miserable I know! we’re a happy bunch really…

Probably ‘Threads’ as it has some groovy riffs, I think it sums us up musically as a band.

Who is your favourite Simpsons character?

I follow the Simpsons clips instagram and my favourite clips are always with Mr Burns, so I’ll have to go with him!

Employed To Serve’s new album Greyer Than You Remember is out now in the UK via Holy Roar Records.

You can follow the band on Facebook at https://www.facebook.com/employedtoserve and on Twitter at @employedtoserve. You can also see them in the flesh supporting Biohazard at The Underworld in London on the 9th of July, along with Rock Sins’ friends Tempers Fray.