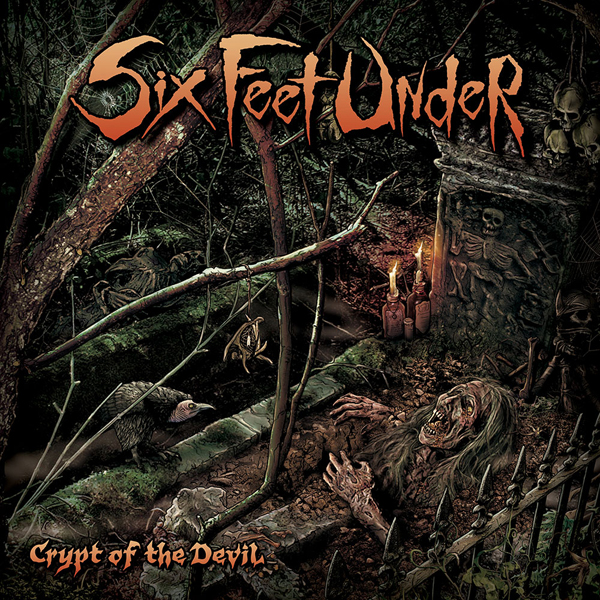 Six Feet Under are renowned throughout the extreme metal community as a marmite band, you either love them or you hate them. Crypt Of The Devil is their 11th album since forming in 1993 as side project for then Cannibal Corpse vocalist Chris Barnes and as the 4th biggest selling death metal band in the US, they have a lot of expectations riding on the quality of this album.

This album was recorded with session musicians from the parody band Cannabis Corpse to fill in for the usual members: Steve Swanson, Jeff Hughell and Marco Pitruzzella. This could have been used to add some interesting influences to the record but unfortunately that was not the case.

Musically, there is nothing overly unique about any of the riffs going on in this album. It is very similar to what they have done in the past and sounds annoyingly like most of Cannibal Corpse’s work in the past 2 decades. However, this doesn’t mean the album isn’t good in terms of riffs if you take it on its own merit. The riffs are heavy and somewhat thrash-like in nature which is always nice. Lyrically, Chris Barnes has gone with his usual theme of gore and various other offensive ideas with a bit of politics thrown in. The track titled ‘Broken Bottle Rape’ was obviously just thrown in there for a bit of controversy that Chris Barnes has been lacking since he left Cannibal Corpse.

This album would definitely be better if Chris Barnes wasn’t on it. His sub-par vocals put a downer on the entire album which is a real pity as this could have been a very strong album if Six Feet Under had made it with a different vocalist. Chris Barnes does have his merits as a lyricist and song writer but his skills as a vocalist have a lot to be desired.

As a whole, this album has strong songs that are fun to headbang to, with heavy riffs and pounding blast beats. On the downside the vocals aren’t the best which makes the listening experience less enjoyable.

Six Feet Under’s Crypt Of The Devil is out now on Metal Blade Records.