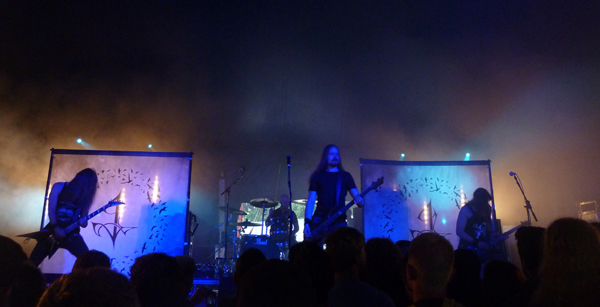 Insomnium’s place on the line up at the 2015 Download Festival is something that many people had been waiting for years to happen. Amid a very crowded press room backstage at Donington due to the inclement weather, Rock Sins was able to find a perch to catch up with Insomnium drummer Markus Hirvonen to talk about the band’s plans for the rest of the year, his favourite Insomnium song, how to survive the weather and much more.

Welcome back to the UK and welcome to Download.

Markus Hirvonen: Thank you so much!

It’s great to finally have Insomnium here at Donington, was the band excited to get the invite to come and play here after many years?

MH: Oh yeah it was really good to be here finally. We always liked watching the line up from the previous years and it was always like “FUCK! That is a really, really good festival” so now finally we are here, so it is really good.

Your only other previous UK festival was Bloodstock?

MH: Yeah we have done Bloodstock but I am not sure about the year, it was 2008…or 7….or 9 *laughs* but we played one time at Bloodstock and it was very good.

Insomnium have started to come to the UK more and more over the last few years, supporting Swallow The Sun a few years ago, you’ve done headline shows, you’ve supported Paradise Lost and just recently the tour with Ensiferum. Have you seen the UK fanbase and audience for the band grow the more you’ve been coming here?

MH: It’s been growing slowly but steadily. We haven’t done like a really big UK tour so we have been only in the main cities here, and they are always good. But if we were to come to the smaller places of course I don’t think it would be as good all the time. London has always been insanely good for us, we’ve done a few sold out shows there over time, and I love it there.

Your last album Shadows Of The Dying has been out for awhile now. The reaction to the album has been almost universally fantastic from the fans and the press, have you been pleased with the way it’s been received?

MH: Yeah we are really happy with the outcome of this album. It sounds good, the songs are really strong, the whole album is really good and of course we knew it would be going out to the whole wide world when we got it tracked but then you just sit back and wait for the reaction. It’s had really good reviews and people are praising the album so of course, that feels good.

Shadows Of The Dying Sun is your second album with Century Media, having been on Candlelight before that. Do you think because Century Media are a bigger label with a bigger media engine around them that that is something that has really helped the band?

MH: Yeah! It really has been. Nothing bad to say about Candlelight of course but when we joined Century Media it is like a whole new world. They really have all the channels and all the engines as you said and they also have the things like contacts with the booking agents and the festivals so it is a complete package. So we are very happy, and they are all really good people who are very dedicated in their work.

Is it right that after Download you are going to America in the Autumn?

MH: Yeah, we have one show in Finland and then like one in Slovenia and then after that we are going to fly to the States and spend five weeks touring there. It will be hot as hell to be there in August! Just like going through Nevada state….fuck! *laughs*
Rock Sins: Make sure the bus has air conditioning, you’re going to need it.
MH: Yes….I hope so too! *laughs* And it will break down, with our luck, it will break down, I am sure.

Is that the main thing you have lined up for the rest of the year?

MH: Yeah, we have some plans but nothing is confirmed so far so I cannot say at the moment, it might be in Europe or it might be somewhere else.
RS: So the chances of seeing Insomnium back in the UK before the end of the year are unknown *laughs*
MH: Yeah, hard to say at the moment *laughs*

With the band having a selection of albums now, is there any one song you particularly class as a favourite or really enjoy playing?

MH: For me, off the new album, The Promethean Song, I really like playing it. It’s really heavy and really melodic and beautiful at the same time as well so that’s basically my favourite!

One final question, as we can currently see the weather’s not been great this weekend…

MH: REALLY?! *laughs*
RS: Being from Scandinavia you guys are no strangers to harsh weather, though maybe a bit more cold and a bit more snow, do you have any tips for surviving festivals in tough conditions?
MH: I may be the worst example for this because I am wearing Converse shoes at the moment! So I should have brought my welly rubber boots with me. I actually thought about it before I left home “should I take my rubber boots with me…nah I’m not gonna need them”. Now…fuck…should have taken them *laughs*.

A review of Insomnium’s breathtakingly good performance from the 2015 Download Festival can be read here. Insomnium are currently in the middle of their US tour with Omnium Gatherum. Bassist and frontman Niilo Sevänen has been unable to take part in the tour due to a family illness. Mike Bear (Artisan, Prototype) is filling in for Niilo on the tour, along with Nick Cordle (ex Arch Enemy, Sanctuary) who is filling in on guitar for Ville Friman.

More information including tour dates and how to buy tickets can be found at the band’s official website www.insomnium.net. Insomnium’s album Shadows Of The Dying Sun is out now on Century Media Records.