Well this is gonna set the cat amongst the proverbial pigeons! J-pop / metal hybrid act Babymetal have just announced they will be headlining at London’s world famous Wembley Arena (or SSE Arena Wembley for it’s full sponsor branded current name) on the 2nd of April 2016!

This news caps an amazing twelve months for Babymetal, who in that time have appeared on the main stage at Sonisphere Knebworth, guested with Dragonforce at this years’ Download Festival, performed at the Metal Hammer Golden Gods and will be appearing at the Reading and Leeds bank holiday festival double header this weekend! They also scooped awards at both the Golden Gods and the Kerrang Awards earlier this Summer.

Tickets for the show will be on sale next Wednesday, the 2nd of September 2015 at 10am through the usual online ticket providers such as AXS and Seetickets.

In addition to the news of the massive London show, Babymetal will also be released two new live DVD’s. Live At Budokan: Red Night & Black Night Apocalypse will detail a performance from Japan’s world famous Budokan venue where many other bands including Dream Theater have recorded live albums and DVD’s in the past. Slightly closer to home, Babymetal: Live In London will feature footage from the band’s two sold out shows at Brixton Academy and The Kentish Town Forum. Both DVD’s will be released on October 30th 2015 through earMusic.

Stay tuned to Rock Sins for further updates on the worldwide marmite phenomenon that is Babymetal! 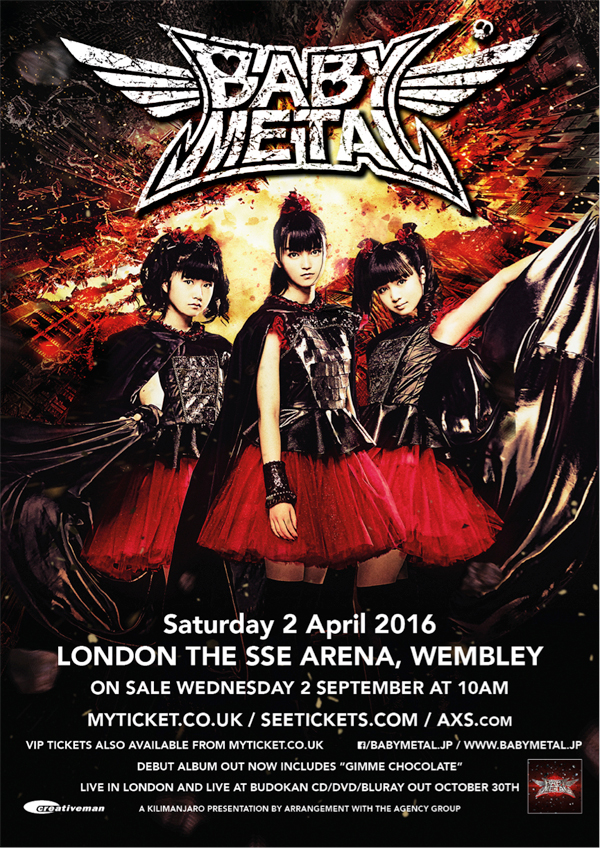