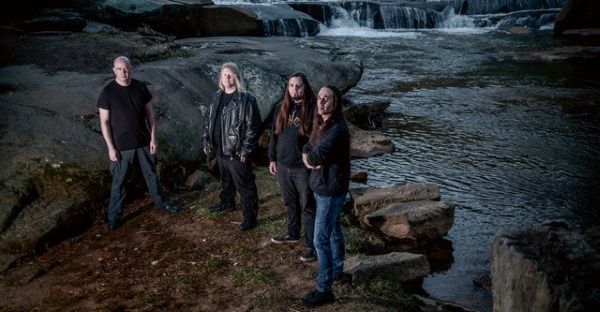 Nile are one of the biggest death metal bands on the planet. Recently I sat down with frontman Karl Sanders to discuss their upcoming album, metal festivals and Enya!

I am! I do love Nile’s older stuff, especially Those Whom The Gods Detest, that was a really good record.
Well thank you, I appreciate that very much. Well if you liked that record you probably might enjoy some of the stuff on What Should Not Be Unearthed. There’s a real focus on keeping things heavy and the songs being catchy and memorable.

Well that’s always a good thing! So did you write all the songs on this record yourself?
Well, Dallas, George and I all worked together on the writing. Dallas contributed 3 songs for this record but you know we all contribute various things here and there.

Of course. So are the influences for this album any different to the older stuff?
Well I think we abandoned a few methods on this record. We’d tried to come at it from a very fresh and different perspective. None of the old rules were allowed to apply this time. In fact, with trying to take tech death metal and making it catchy and memorable, you’ve got to turn the rulebook upside down! You have to throw away a lot of preconceived notions about what tech death is supposed to be and in doing that, finding what really matters to the song.

Definitely! It’s always important to keep it fresh, in my opinion, or it does tend to get a bit boring after a few decades.
For sure! It gets smelly, like it’s been left in the refrigerator for too long. You’ve gotta take it out of the refrigerator.

Now, the thing with Nile is that it has ancient Egyptian themes which is something I’ve never seen in the death metal scene. What made you decide to form a death metal band with ancient Egyptian themes?
Well when we were starting out in 1993, there was no such thing as ancient Egyptian themed death metal. You either copied Suffocation or you copied Cannibal Corpse you know? If you did anything other than that, people would instantly reject it. So, it was quite blasphemous an idea, at that time, to go down a different path. We really wanted to carve our own edge and not copy everyone else. We thought, at that time, that it was completely doomed to failure but it’s quite liberating when you are unconcerned about whether something is going to succeed or not.

Are you interested in other areas of history or is it strictly ancient Egypt?
Well as a casual fan of world history I enjoy all sorts of different cultures and whatnot. But as far as if I would consider changing Nile to include other histories of different areas, I think not. I think at this point Nile is very well established and to go against fan expectations would be nearly suicidal. With At The Gate Of Sethu we did a much cleaner record that focused more on musicianship and technicality and changing the sound to a cleaner sound made a lot of our fans go into a frenzy of “What the f*ck is this!?* You know?

Do you have any tour plans in support of this album?
We do! We are touring this fall with Suffocation. This tour does come to the UK, I know we have a gig in London in The Dome. We haven’t played The Dome since we played in 1999 or 2000 with The Haunted.

On a similar note, festival season is in full swing with Wacken in Germany, Mayhem in the US, Bloodstock in the UK and many more. Do you have a favourite festival you like to play?
I think Party.San Open Air festival in Germany is always a lot of fun and Brutal Assault festival in the Czech Republic is pretty awesome. Yeah but you know, it’s hard to argue with Wacken. It’s the crème de la crème of metal fests.

So you’re not only a vocalist, you’re a guitarist as well. When did you start playing guitar?
I was nine years old when I started playing guitar and I’m fifty two now so do the math! That’s a lot of years of guitar playing.

What guitar did you start off playing?
Well I started off playing an acoustic guitar like everyone else and then a few years later I talked my parents into getting me a bass guitar. My mother, god bless her, said that she thought I’d be a better bass player if I took some guitar lessons and it was hard to argue with her, she had a good point! I started taking guitar lessons and the bass kind of got left behind because I really had an affinity with the electric guitar.

You’re endorsed by Dean Guitars right?
That’s correct! Although you could say I endorse them depending on your perspective.

Do you have a favourite Dean model?
Well that would be the Karl Sanders guitar model. It’s called the Black V.

Do you play this guitar on stage?
For sure man. Actually we haven’t been on tour since this guitar came out but now I have it, I will be playing it on stage. It’s actually based on one of my USA handmade Deans. It’s an exact replica, down to the pick-up wiring and the finish. Everything!

Awesome! Do you have a favourite guitar player?
Uli Jon Roth.

I can’t even debate you on that, he’s brilliant.
He is brilliant! You can’t argue with the genius of Uli Jon Roth.

I take it you listen to a lot of heavy metal in your spare time?
I think I’ve listened to my fair share.

Do you think there are any really good upcoming bands that you would recommend to other people?
I really like a band called Lecherous Nocturne. It’s the most brutal f*cking sh*t on the planet.

I’ll check them out!
You definitely should my friend!

So, Nile have toured with a multitude of bands in the past god knows how many years. Do you have a favourite band that you like to tour with?
Immolation and Krisiun, a toss-up between those two.

Immolation are absolutely fantastic!
They are the real thing dude.

You have a solo side project don’t you?
I do. I’ve released two albums with that project. A lot of people have been asking me if there’s going to be a third one but I’ve got to say, Nile is a big priority for me, it doesn’t leave a lot of time for anything else. If the metal gods are willing, maybe there will be a third solo record.

You go for the more Egyptian folk sound with this project don’t you? Is that to give you some relief from the constant death metal?
More or less, I think you said that really well. When you’re playing death metal for a living and you go on tour, it’s just constant. Not just from our band but from the other bands on the tour and the soundcheck, that’s a lot of f*cking death metal every day! While I appreciate that, there are times that I need a bit of peace and quiet.

I guess sometimes you’ve just got to settle down with some Enya or something.
Well Enya kind of makes me want to gag. It’s a bit too sappy. I need my stuff a little bit darker.

Fair enough! Well it’s been an absolute pleasure talking to you, thank you so much for your time!
Well thank you Alexander! I’m hoping to see you when we come to the UK this fall.
I’ll be there!

Nile’s upcoming album, What Should Not Be Unearthed will be released August 28th 2015 on Nuclear Blast Records and their UK tour with Suffocation kicks off September 6th 2015 in Plymouth.