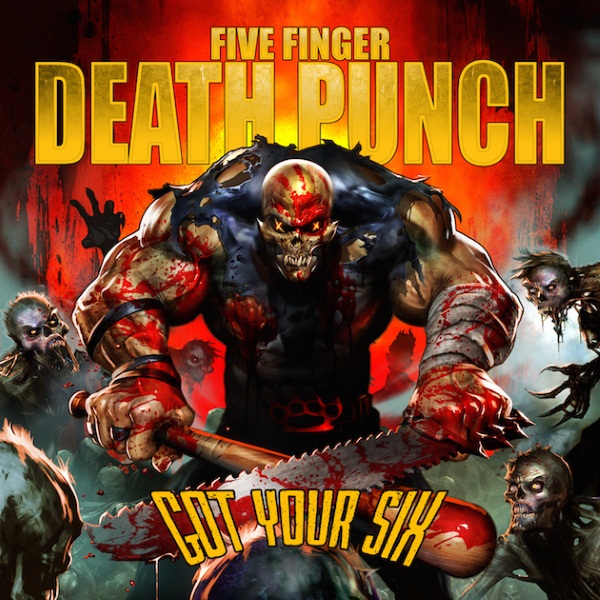 Five Finger Death Punch are always going to divide opinion in the metal world. With various well documented upsets surrounding the band in recent months, their sixth album Got Your Six provides a timely opportunity to refocus back onto the band’s musical output. Can they continue their relentless climb to the top of the metal world with their latest record?

The album’s opener and title track sounds exactly how you would expect a typical Five Finger Death Punch song to sound, with galloping riffs and Ivan Moody’s trademark aggressive vocals firing away, though the guitar solo sounds like they took the one from Under & Over It (from American Capitalist) and recycled it with a few changes. Lead single Jekyll & Hide has proven very divisive, with fans and critics alike either loving it or hating it. This review leans towards the latter, as the song feels clichéd and borders on making FFDP seem overly obnoxious, but then perhaps that’s the point of it. This is a band who’ve never paid too much attention to critics and have proven their doubters wrong time and again.

Wash It All Away sees Five Finger Death Punch hitting their stride, with a song that follows some of their previous hits like Hard To See in it’s ability to come across as hard hitting yet have massive mainstream appeal, particularly with it’s huge chorus. The only complaint (again) is that the solo feels like it’s been heard before. My Nemesis is another sure fire hit with a chorus designed to be echoed across arenas and festivals alike while Question Everything has a haunting main riff over which Ivan Moody shows his full range with some of his best lyrics (often regarded as a FFDP weak spot) to date.

It’s not all big soaring choruses and singalongs though. No Sudden Movement wouldn’t have felt out of place on the band’s début album The Way Of The Fist with it’s pummelling drums from Jeremy Spencer while Jason Hook lets rip with the best (and most original) solo on the album. The closing Boots and Blood also offers another blast of typical Death Punch aggression and is another track that could turn into a firm live favourite.

If you weren’t a Five Finger Death Punch fan before Got Your Six it’s unlikely that this album will sway your view. For the ever increasing numbers who are members of The Death Punch army however, this is an album that for the most part they are likely to lap up and treasure for weeks and months to come. Love them or hate them, so long as they can keep their personal shit together, Five Finger Death Punch’s march to the metal summit is assured. Got Your Six is just one more step along the way.

Got Your Six is released on the 4th of September 2015 through Eleven Seven Music.