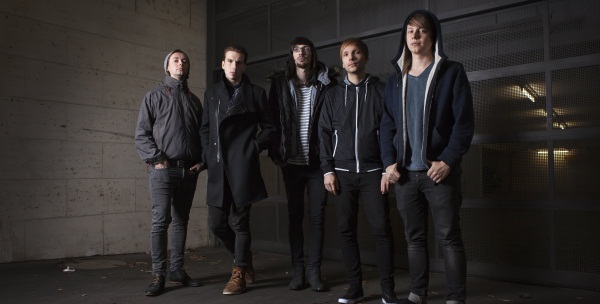 It’s time to welcome in the week with the latest in our “introducing” series here on Rock Sins highlighting new bands. This time around we catch up with Christoph from German metalcore outfit Annisokay – who had a taste of the action in the UK earlier this year touring with Fearless Vampire Killers.

Hi, I’m Christoph, singer and guitarist of a band called Annisokay. We’re from Germany and we play metalcore!

Annisokay was actually founded back in 2007, but things really kicked off around 3 years ago with the release of our first album The Lucid Dream[er]. It earned us a record deal with a big german label called SPV, which we just released our second studio album Enigmatic Smile on. We love playing shows and have had some great opportunities come our way – supporting big German acts as well as international ones like Silverstein, Blessthefall and Falling In Reverse.

I think each one of us has our own special kind of humour, so I wouldn’t like to pick only one! We’re a pretty funny band I like to think. Everyone who’s met us can hopefully vouch for that! Then again, I honestly tried to make a joke here but I got nothing… Damn! Haha

We play heavy music with emotional melodies and lyrics. We love to combine the evil and the good, like heavy breakdownish parts with progressive drums, meaty guitars and screams as well as catchy clean vocals and lead melodies which give you goosebumps.

Yeah, we usually write our lyrics first to help us establish the concept of the song. The song should tell a story or have a meaning, and the atmosphere of the music should support this. So once we have a cool chorus, we’ll go on to write all the other parts – at this stage of song writing everyone in the band is involved.

You’ve recently returned home from a few shows here in the UK with Fearless Vampire Killers – how did that go for you?

It was amazing! I know every band would tell you this, but we are really telling the truth. The kids on the shows had so much fun head banging to our music, even though a lot of them had probably not heard of us. The feedback from the crowd was impressively great, so as you can imagine, there’s no better feeling for a musician to play shows like that far away from home.

What do you have lined up in the next few months? Any chances of seeing you in the UK again in 2015?

2015 is already a pretty tight schedule, but we’re working really hard on getting back ASAP! First we’ve got to shoot some music videos, then play some German festivals over the summer. In October we’ll have our big headline tour through Germany, Austria, Switzerland and Luxembourg, and our new friends from Fearless Vampire Killers will support us this time. It’s definitely going to be one of our highlights this year!

I think it would be a song called Sky. It’s a really tough decision though, because we have so many different sounds in our songs that I’d really hate to pick only one song. Sky is still one of our hits though. It has nearly half a million views on YouTube and it was our first single so most people got to know us through it.

For me personally it would be Bring Me The Horizon. But as a band we really wish to tour with Architects – they’ve inspired us so much over the last year. I also know our bassist Norbert has always wanted to tour with Slipknot, just because of the huge stages and production at every show!

It’s definitely Mr Burns. But if I’m allowed to mention my real cartoon hero, than it is Rocko of Rocko’s Modern Life. Most people won’t even know this TV show anymore, but I can tell that I identified so much with this little kangaroo dude when I was younger! I’m pretty sure his stories are based on my life… If you’ve never seen this show, definitely check this out. But first, make sure you get our new album Enigmatic Smile out now!

Annisokay’s album Enigmatic Smile is out now on Long Branch Records. You can acquire it digitally from iTunes here. You can also check out Annisokay’s recent video for their song Carry Me Away below: