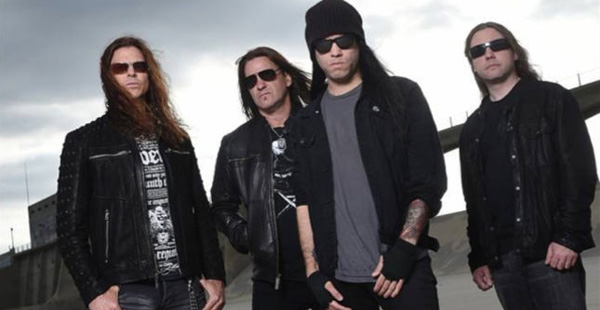 The metal world was stunned in November 2014 when the news broke that both Chris Broderick and Shaun Drover would be stepping down from their duties with thrash behemoths Megadeth. Since their departure the duo have been hard at work with their next musical endeavour, Act of Defiance. A week before their debut album, Birth and the Burial, was released, we spoke to Chris Broderick about the album’s sound, his reasons for leaving Megadeth and how Chris pulls from his own life experiences into his own writing style.

Your debut album under your new project Act of Defiance, Birth and the Burial is out next week. Are you looking forward to the release?

Chris: Absolutely! I think we have done a really good job so far of how we are going to sound and what the band is going to be like. We have released Legion of Lies and Refrain and Refracture and now everybody will be able to hear the rest of the songs on the CD. So I am really excited to hear what they will make of the rest of the album!

The band was formed in 2014 following your departure from Megadeth, was Act of Defiance always a project in the works or did it start as soon as you left Megadeth?

Chris: Yeah it pretty much started as soon as I left Megadeth, I had thought about leaving for some time, it had been weighing on my mind. And when I did leave, Shaun [Drover] and I were both talking about all this great music we hadn’t released and how it would suck that it wouldn’t ever get out to the public. So we started throwing around the idea of “why don’t we release it?” From there it was just like why don’t we form a band and really have a go at it! So that’s what it became.

The musical style of Act of Defiance carries a lot of similarities with Megadeth but it also embraces other areas within metal. Was that always the aim of the band?

Chris: Well it’s funny because today I think it is much harder to appeal to everyone, people seem to just want something that is pigeon holed in a specific style. And that is exactly what we are not, I didn’t want to just be classified as a thrash band or just a progressive metal band. I just wanted to write what I felt at the time and get it out and just hope that people would dig it!

The record’s lyrical themes deal with a lot of personal experiences, is this a reflection of yourself and your experiences?

So has that always been your writing style?

Chris: Absolutely! It is what I prefer as far as a lyrical writing style goes because otherwise if you are telling a story they can only listen to that aspect, they can only take the lyrics that you are offering them and take it for face value. Whereas I think it means so much more to each individual when they can apply their own stories and their own life lessons to it.

So is that writing style a big ideal for Act of Defiance?

Chris: For me personally it is, but as far as Shaun, Henry and Matt they might have their own take on how they want the band to be perceived. Whatever they come up with as far as writing will be included too even if it has a different direction.

So the recording for Birth and the Burial was split between three different studios. Did that ever complicate the recording process at all?

Chris: It actually worked out really well, it was quite simple! Co-ordinating between Chris Harris and myself from my studio was really a breeze so I had gotten him the demos we had done from my studio and I think he set up his sessions exactly the same way. Therefore, when we were bouncing files back and forth they just popped right in, there was nothing to worry about. As far as Matt’s recordings goes, he initially got together with Chris Harris too and did a little bit of prep work too, just to make sure everything was flying! It really worked out really well.

Chris: Oh that’s a hard one! It’s hard for me to say what people are going to like, I’d never claim to know that. But I would say Act of Defiance will offer elements from each of those styles, things I think people are going to like. Some of the thrashier stuff we bring to the table definitely has more of a Megadeth type of vibe. As far as my own personal progressive heavier writing, I think people that liked the Nevermore stuff will get into that. So that’s what I’d say would be the general opinion of those two styles.

So what are you hoping to achieve with Act of Defiance?

Chris: We haven’t really set out to do anything, we just initially wanted to write our own music. We wanted to have our own creative freedom. So far, we definitely have accomplished that, as far as continuing on we definitely want to get out and tour! We are looking at some tours right now so we are excited about the potential to do that, it just has to be the right place and time.

So the creative freedom you just spoke about, was that something you did not have with Megadeth?

Chris: I can only speak for myself, but I felt very limited expressively in Megadeth. It is one of those things where Megadeth is Dave Mustaine and he is the sound of Megadeth so he has that right. For me it became a choice of I want to be a creative musician and I want to be able to get out and say what I have to say. So it just became time to make that happen.

So Act of Defiance really is you expressing yourself in your own creative freedom?

Well I really appreciate your time talking to me, thank you Chris!

Act Of Defiance’s debut album Birth & The Burial is out now on Metal Blade Records. Chris Broderick can be followed on Twitter at @Chris_Broderick. Further updates from Chris Broderick and the rest of Act Of Defiance will be reported here as and when we’ve got any news to bring to our readers.