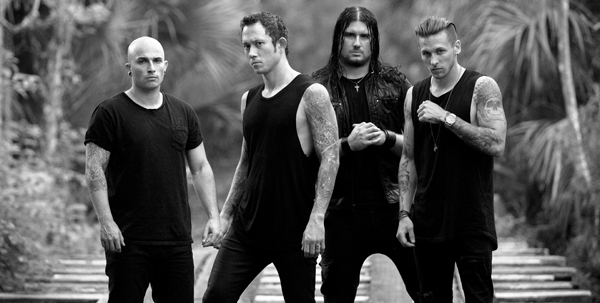 Today is a long awaited day for Trivium fans – it’s release day for their brand new album Silence In The Snow. The seventh studio album of Trivium’s career was the focus of the first part of our interview with Trivium’s guitarist Corey Beaulieu at Bloodstock Festival, as he took us through a lot of the process and inspirations behind the album (anyone who missed that can find part one of the interview here). But Silence In The Snow wasn’t the only thing discussed. In part two Corey covers putting together a setlist for a big festival such as Bloodstock, playing B-Sides and more.

How do Trivium typically go about constructing setlists?

We try to balance it as much as possible. We don’t want to completely ignore a record so we at least try ot get at least one song, or a cople of songs from each record. We’ll have a certain amount of songs from the older, heavier stuff to the newer stuff that’s all singing. So we just try to give a good balance. Fans like a variety of our songs. It also depends on tours. We can play super heavy fast stuff or we can play some more melodic stuff depending on what crowd we’re playing in front of. We just try to balance it, mix it up and put some curveballs in too. We like to mix it up for ourselves too. Playing the same songs, in the same order forever; it’s just not fun y’know.

Have you altered the setlist at all to reflect Bloodstock’s more extreme roots?

Well overall I think some of the songs might not be as heavy but they’re songs that fit big outdoor stages but we have songs from all the heavier records. Shogun stuff, Ascendancy stuff, new stuff. Its all in there, it all comes across aggressive and energetic live. So I think it’ll be a good setlist with our big stage production that no-one’s seen.

What’s your favourite Trivium song that you don’t get to play live?

All the songs we’ve played together. One of the songs we tried to get ready to play but it didn’t end up working out was ‘Tread the Floods’. We’ve been trying to get that song going in the setlist as a surprise song but every time we’ve tried doing it there’s been something that’s prevented it. That’s something that hopefully in the not too distant future we’ll get back to playing. We’ve got a lot of songs at this point.

Would you ever do a rare cuts live set or a b-sides album?

Well, with stuff like Spotify and iTunes you can pretty much just buy the tracks. So you could do that, but over the years we’ve played our Iron Maiden cover which is a b-side, we’ve played our Sepultura cover which is a b-side. B-Sides from Ascendancy we’ve played and one of the B-Sides from The Crusade we’ve played a few times. But with all our big songs that everyone knows, if you play one (B-Side)to a big crowd, only the super fans are just like “fuck yeah” and everyone else just kinda goes “I don’t know what this is.” It’s hard to play an entire set of that sort of stuff to people who don’t dig that deep. It would be fun, but we’ve kinda gotta be clever about what we play.

As mentioned above, Trivium’s brand new album Silence In The Snow was released today (October 2nd 2015) through Roadrunner Records. Rock Sins’ review of Silence In The Snow can be found here. To keep up to date with Corey Beaulieu on social media, he can be followed on Twitter at @CoreyTrivium.