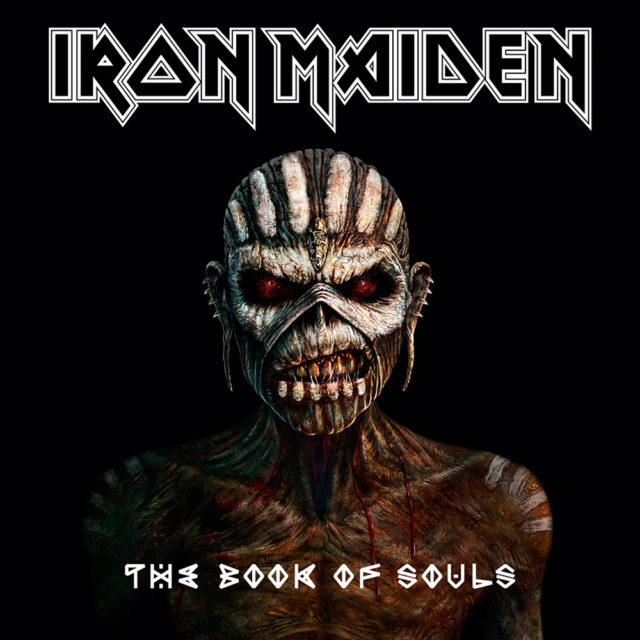 Overall Score: 9/10 Songwriting: 10/10 Vocals: 8/10 Consistency: 9/10 Pros: Iron Maiden are as good as ever | Band can still find ways to adapt their staple sound Cons: Double album can test the patience of some listeners | Bruce Dickinson’s voice feels strained at times

There’s no disputing that Iron Maiden are, along with Black Sabbath, the most famous British heavy metal band of all time. Songs such as “Run to the Hills” and “Number of the Beast” are synonymous with the public perception of the genre, and turn of the century albums including 2010’s global No. 1, The Final Frontier, cemented the band’s lasting legacy. Now, after 5 years of touring, unhindered by a cancer scare for lead singer Bruce Dickinson early in the year, the band have finally unleashed their first double album, The Book of Souls.

The album opens off with the typical Maiden galloping riffs and soaring vocals from Dickinson in “If Eternity Should Fail”, a mid-paced 8 minute epic (also the band’s first use of Drop D tuning). Songs in the first part of the album, such as the opener and lead single “Speed of Light”, make it immediately clear that Iron Maiden have lost none of their well defined knack for creating catchy hooks, quality choruses and epic guitar solo battles between the three guitarists of Dave Murray, Adrian Smith and Janick Gers. Long time fans of the band will know that what you see is what you get with Iron Maiden: the core sound has endured for 40 years now and yet it still finds ways to stay as fresh as ever.

The new collaborative approach to songwriting – the first time bassist Steve Harris hasn’t had a part in every track – has seen everyone contributing their own tracks, with the exception of Nicko McBrain, and this refreshed approach to songwriting has only helped the band to bring in new ideas. The band can shift pace at will, from slow to mid-paced burners such as the opening “If Eternity Should Fail”, “The Great Unknown” and 18 minute piano driven closer “Empire of the Clouds”, to the adrenaline fuelled riffs of “Speed of Light” and “When the River Runs Deep”, even shifting mid-song in some tracks, something which comes as a perk of longer track lengths. If one thing is certain from this, it’s that the band has still not lost their passion for music even after all these years.

Long instrumental passages are a main trademark of the modern Iron Maiden sound. “The Red and the Black” executes this perfectly, with almost gang-like “whoas” in the background of the chorus and more guitar majesty from the guitar trio. This track as well as the title track can only go to support the fact that this is Maiden on top of their game. On the second half of the album, “Tears of a Clown” stands as another real highlight, as well as a worthy tribute to the late comedian Robin Williams, whose death last year inspired the track. Closer “Empire of the Clouds” is easily the best “epic closer” that Iron Maiden have ever had, with Bruce’s piano, delicate orchestration and the powerful instrumental passages more than justifying its 18 minute runtime.

The only negatives in this lie in the production, which while still relatively modern compared to the band’s classic output, can at times feel dated. The three guitars are always struggling to make themselves heard and Steve Harris’s bass can at times suffer from this battle of guitars, and at times it feels as if you can only hear the one guitar playing. As well as this, Bruce Dickinson’s voice at times sounds considerably more strained as he pushes for the higher notes. This is just something that comes with age and was likely not helped by the tongue cancer that he was suffering from at the time of recording, however one may feel that if the band simply played the songs in a lower key then it may prove extremely beneficial to Bruce’s throat and provide a little bit more longevity for his voice.

Nonetheless, this is another classic for Iron Maiden’s already bulging back catalogue, and it’s hard to see just how they can put a foot wrong. A worldwide tour for the album is set for 2016, with Dickinson nearing full recovery for his throat, and the band should be on top form by the time they feel they’re ready for their next album, should that time come.

Iron Maiden’s new album The Book of Souls is out now via Parlophone Records. The band are set to go on a world tour in support of the album during 2016. For updates, follow the band on Facebook.