UK math rock noise masters Rolo Tomassi have returned! After a Summer spent playing some festivals and releasing their latest album Grievances, the band are pleased to bring their latest music video to the masses! You can check out the video for the song The Embers below, which showcases a hint of what Rolo Tomassi have been doing over the Summer:

Want to know what Rolo Tomassi think of The Embers? The band will tell you, right now:

“The Embers has been a firm favourite for us to play live so far because of the energy that runs throughout the track. To me, its one of the more upbeat and melodic tracks on the record and we wanted to make a video that got that across as well as showing what a fun song it is to play live.”

Rolo Tomassi will embark on their first UK tour since the release of their latest album Grievances in a couple of weeks time. Supporting them on the tour will be John Coffey & Employed To Serve:

Ticket information is available from the usual places such as Seetickets with prices starting at just £5 plus fees! Grievances is out now on Holy Roar Records. 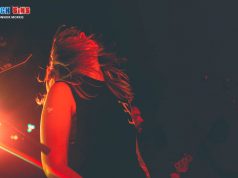