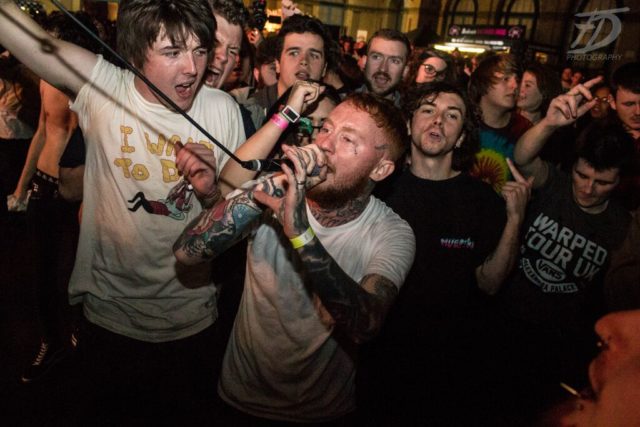 After being absent last year, The Vans Warped Tour returned to the UK this year with a line up that certainly proved divisive. There’s no denying that despite Asking Alexandria and Black Veil Brides both being hugely popular, just as many people hate the bands. Still with a queue of young fans stretching around Alexandra Palace it’s clear that lots of people were very excited for today.

After some serious technical issues delayed the start by 20 minutes, The Word Alive (6) were finally able to kick things off on the Monster Energy East Stage. Whilst there is nothing original at all about their metalcore tunes (even their stage moves and banter have been done by nearly every other band), they still do a decent job of opening up the main stage. The room might only be gradually filling up but every fan in there ends up going insane for the full 30 minute set. It’s the kind of easily digestible  metalcore set that this kind of crowd were always going to enjoy. Despite things feeling very generic and lacking in terms of excitement the band sound very tight and “Life Cycles” ends things on an impressive note. 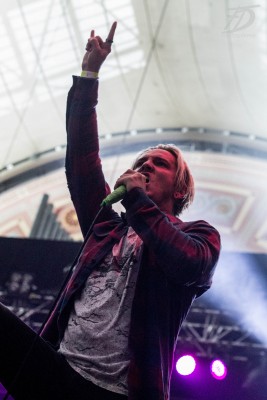 Seconds after The Word Alive finish, Ghost Town (3) take to the Monster Energy West Stage to play a set that can only be described a horrendously bad. Watching Ghost Town felt like watching a band assembled by a community in order to try and please the teenage market. Their bland songs lack any kind of authenticity and with the exception of the odd scream from vocalist Kevin McCullough there is very little here that actually feels like rock music. This wouldn’t really be a problem if the songs were any good but there isn’t a single catchy chorus throughout their set. Again a large portion of the crowd seem to love what they see here but it really is hard to see why.

Fortunately Rob Lynch (7.5) began soon after on the Jagermeister Stage and quickly banished any negative feelings with his cheery acoustic pop-punk. It might be a little bit too cheesy for some but it’s hard not to be won over by Rob Lynch as he genuinely seems so happy to be playing. He even jokes about being surprised people have come along to watch him considering he’s not metalcore. He might not be playing to many people but by the time he’s got a large portion of this unfamiliar crowd singing along to “My Friends & I” it’s clear today was a success for him.

Back on the Monster Energy West Stage it was time for Metro Station (6). Surprisingly this set doesn’t end up being the car crash many people expected, it isn’t amazing either but it does end up being a lot of nostalgic fun. The moment they open with “Control” it’s fairly clear that Trace Cyrus’ contributions to the band are almost non-existent but fortunately Mason Musso is able to carry the rest of the set. Mixing older material with newer songs it’s very clear lots of people aren’t interested in hearing new Metro Station music in 2015 but then “Shake It” also manages to get everyone in the room dancing and singing along. Whilst their position in the world of rock music is questionable it’s hard to deny Metro Station do have a few pop bangers and are capable of delivering 30 minutes of nostalgic fun. 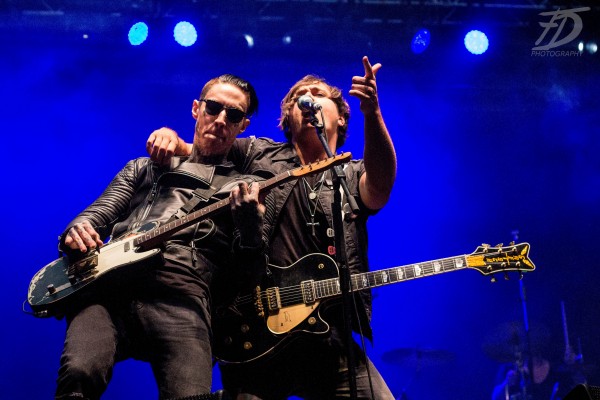 Following this The Rocket Summer (4) brings things crashing back down with 30 minutes of rubbish pop-rock. Again there isn’t a single memorable chorus or anything remotely interesting throughout their set. With easily the smallest main stage crowd of the day it’s clear how little people care about The Rocket Summer here as well. The only nice thing that can really be said is this wasn’t as offensively bad as Ghost Town were earlier.

August Burns Red’s (9) arrival is a blessing as we finally get the first brilliant set of the day. Despite not playing to a particularly big crowd, August Burns Red treat everyone to a thrilling 40 minutes of genuinely brilliant metalcore. Never resorting to a repetitive stream of chugging breakdowns, August Burns Red make a point of being one of the original metalcore bands going. The technicality of the riffs is unmatched and the songs are uncompromisingly heavy. However August Burns Red still know how to have some fun, whether it’s Jake Luhrs dance moves onstage or replacing breakdowns with surf rock and western riffs. It’s clear they might not be as accessible as some of the other metalcore bands playing today but they are a huge reminder of how great the genre can be when bands put a little thought and care into things.

Down on the Kevin Says Stage, Creeper (8.5) completely justify why they are one of the most talked about new bands right now. Exploding onstage with “VCR” the band sound absolutely massive despite playing in the smallest room of the festival. The bands energy is unmatched today and at the centre of it all is vocalist Will Gould, whose performance today is genuinely fantastic. Despite only having two EP’s out, Creeper already have plenty of great songs with some of the catchiest choruses going. The only real downside to their set is that more people can’t get in to watch as security bizarrely decide to stop letting people in despite the room not being full. Still this is a minor issue in what is otherwise a great set from one of the UK’s most exciting punk bands. 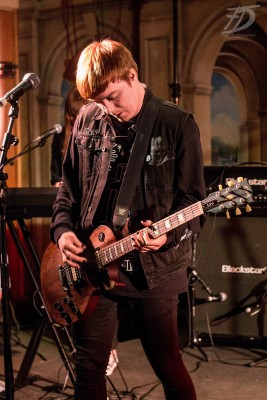 Back up on the Jagermeister Stage Moose Blood (7) were busy being the nice guys of Warped Tour UK. They might not be the most exciting band going but they manage to get some of the biggest sing-alongs of the day going. Despite a slightly awkward stage presence the band seem genuinely happy to be onstage and almost surprised by the amount of people watching them. Drawing their set entirely from their great debut album I’ll Keep You In Mind, From Time to Time leads to plenty of crowd pleasing moments. Today is a great sign that big things are to come from Moose Blood. 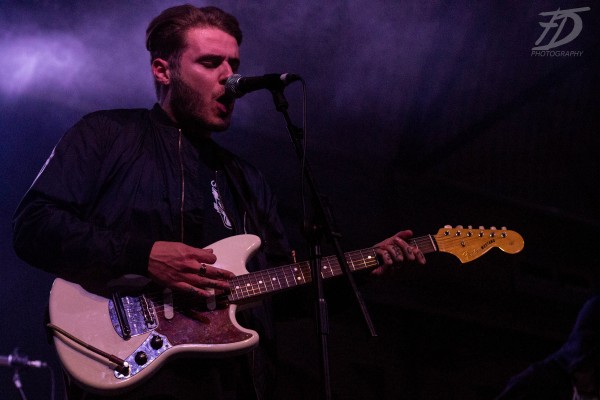 “I know it’s been a long day and there’s been a lot of shit bands” claims Frank Carter within seconds of arriving on the Jukely Stage. Moments later he’s kicked in with “Paradise” and it’s immediately clear that Frank Carter & The Rattlesnakes (9.5) was gonna be the standout set of the day. Before the end of the song Frank is stood on top of the crowd before continuing the next part of the set in the middle of the pit. “Juggernaut” leads to the biggest circle pit of the day, stretching over onto the Jagermeister Stage. A stripped down version of “Loss” provides a nice change of a pace and proves there’s more to Frank Carter than just being “that angry ginger bloke”. What really makes this set special it that it feels like a statement about punk reclaiming Warped Tour. Frank Carter wasn’t afraid to call out both headliners but then he’s never been a man to keep his opinions to himself. Wrapping up with “I Hate You” with every fan screaming along just confirms that Frank Carter & The Rattlesnakes completely stole the show today. 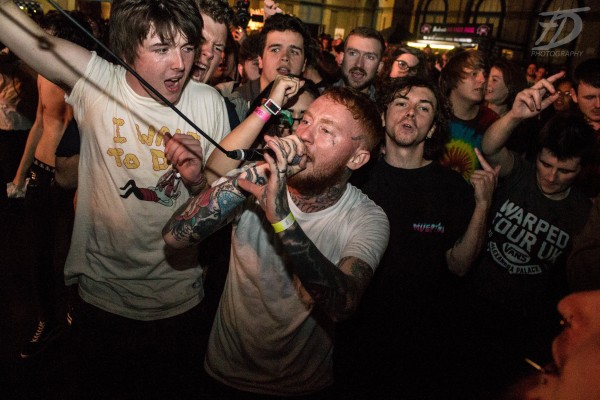 Young Guns (8) end up with one of the hardest slots of the weekend. Not only do they have to follow Frank Carter but they are also on during the first of tonights main stage headliners meaning most people are off watching them. Still they don’t seem too bothered and set of to prove why they are still one of the finest UK rock bands around. Drawing heavily from their latest album Ones and Zeros they still find time to squeeze in a few older tracks like “Daughter of the Sea” and “Winter Kiss”. Vocalist Gustav Wood has often been described as being too “beige” but he does a great job of proving that description incorrect. His energy and stage presence is fantastic and he controls the crowd with ease. With the promise of a new album next year it’s clear Young Guns known they have to rebuild quickly after the large gap between their last albums but based on tonights performance they shouldn’t have too much trouble. 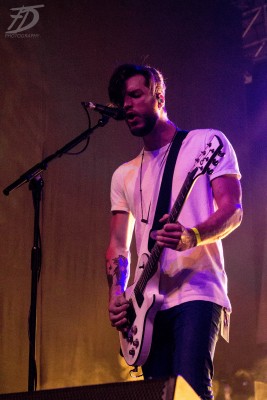 Finally it was time for Anti-Flag (9) to end the day providing a great alternative for anyone not interested in seeing Black Veil Brides. Unfortunately this leaves them playing to one of the smallest crowds of the day which is a huge shame. Still as bassist Chris #2 says “we might not have the numbers but we have the heart” it’s clear the band aren’t bothered and just want this to be a memorable set for their fans, which is exactly what they do. Mixing in classics with songs from their brilliant new album Anti-Flag find the perfect balance in delivering a crowd pleasing setlist. It’s also nice to see a band who really stand for something today, with frontman Justin Sane taking time to talk about organisations like The People’s Assembly showing that punk is still about progress and making a change. Ending the set with “Die For Your Government” has them bringing the drum kit down into the crowd and Chris #2 stood on top of it leading the crowd through one final sing along. Anti-Flag end Warped Tour UK in style and help remind people that no matter how much it has changed, Warped Tour is still a punk festival deep down. 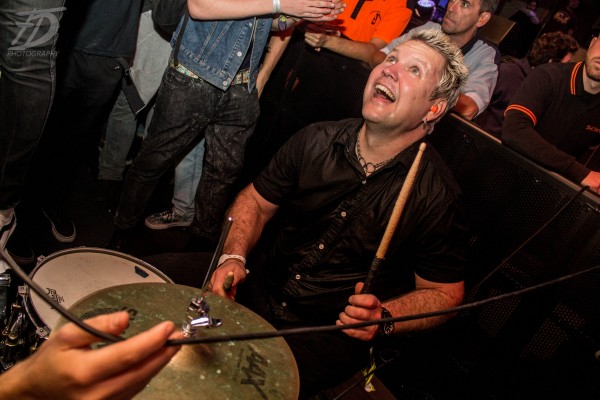