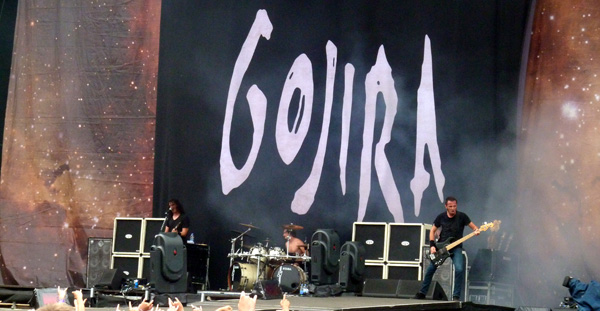 As far as UK festival announcements go, this is pretty spectacular. Bloodstock Open Air Festival 2016 is already shaping up to be another amazing installment of the UK’s favourite independent metal festival, and the BOA team have pulled off some more cracking additions to the line up. Leading the charge in their highest profile UK festival appearance to date are French metal titans Gojira, who are going to fill the special guest slot directly before Mastodon on the Saturday. That’s right, Gojira into Mastodon. That is going to blow a lot of people’s minds!

Filling Sunday’s special guest slot (with the headliner yet to be revealed) are big four thrash legends Anthrax. With a new album (For All Kings) heading our way in February, next Summer seems the perfect time for Scott Ian, Joey Belladonna and co to return to Catton Hall! Scott Ian is very excited over the prospect:

“On the most metal of days we will once again have the privilege to rage with you crazy fuckers! BLOODSTOCK!!! A festival fit for all kings!!! See what I did there? See ya soon, my friends.”

Last but not least, Norwegian black metal favourites Satyricon will also be making their return to BOA next Summer. Celebrating the 20th anniversary of their Nemesis Devina album – they’re going to honour the anniversary by playing Nemesis Devina in full on the Sunday of Bloodstock 2016!

Gojira, Anthrax and Satyricon join the already announced Mastodon, Twisted Sister, Behemoth, Venom, Paradise Lost, Rotting Christ and Dragonforce on the line up for Bloodstock Open Air Festival 2016 with dozens more bands to come. Tickets for BOA 2016 can be obtained from their official ticket partners Seetickets on the following link – https://bloodstock.seetickets.com/event/bloodstock-2016/catton-park/902838. Stay tuned for further announcements from the Bloodstock team, including news of the final headliner, in the weeks to come.