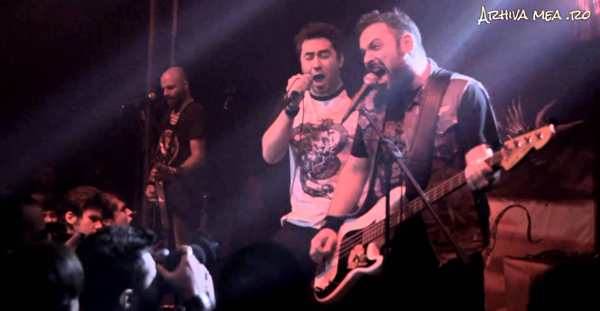 On October 30, 2015, Romania was rocked by a shocking fire at The Colectiv Nightclub that caused unprecedented destruction in its wake. The fire, caused by a pyrotechnic error, has so far killed at least 60 people (as of November 23), including many members of the local rock and metal scene within Bucharest. In this article, with the help of DinUmbra‘s Liviu Ustinescu, who had many close links with those involved, we will remember some of the people we’ve lost.

Adrian Rugina was a popular member of the Bucharest scene. As well as his own bands, he was a known producer and helped with the sound for a number of high profile concerts in the Romanian capital. When the fire broke out, Adrian risked his life to save others who were trapped in the venue. He was posthumously awarded a National Order of Merit for his sacrifice.

Liviu: “He was pretty important in the local music scene. He was sound engineer for both big and small acts. He was behind the board for big commercial acts like Depeche Mode but both for metal bands, big acts like Nightwish but also for small local bands. Basically Adrian worked as much as he could , no matter the size of the event. He also used to be the drummer for folk rock/metal band Bucium and symphonic power metal band, Nexus.

“Adrian was one of the first that managed to escape from the fire. He was already seriously injured when he got out, however, he turned back and pulled another 5 people from flames. He was knighted post mortem by President Klaus Johannis.”

Tudor Golu was also in the crowd at the time. One of the guitarists in progressive/avant-garde group Axial Lead, he was also a graphic artist who worked with many local acts, including media for Goodbye to Gravity in the build up to their album release. He survived the initial blaze, but passed away as a result of his injuries on November 10 in Birmingham.

Liviu: “He was a personal friend of mine and my fiancée. He was a very, very talented graphic artist. Could do both 2d and 3d animations like a pro. He actually did the video for Goodbye To Gravity – The Day We Die. He was in the club with another 2 friends of mine from progressive metal band Axial Lead. Tudor was one of the guitarists. The other two were Radu Damian (singer and designer of the artwork for Goodbye to Gravity’s latest album), and Christian Alban, the other guitarist.

About Tudor as a person, he was very gentle and well mannered. Maybe too kind for his own good. A perfectionist in all he did, with the little resources he had available to him. He and his father made a guitar amp from scratch. He had a very goofy sense of humor which we loved.

He was severely injured but we were optimistic that he would pull through. I tried to visit him several times at the hospital but access was only granted to his parents. He died in Birmingham after he was flown there with a Nato plane. I don’t know what else to tell you about Tudor. We miss him a lot and we’ll try to be supportive to his family through this.”

Laurentiu Varlam played guitar in Up to Eleven, who were also on Universal Music Romania along with Goodbye to Gravity. Also in the audience at the time of the fire, he passed away in the building on October 30.

Liviu: “I met him when I was hosting a radio show with local bands. He and his buddies were playing in hard rock/post grunge band Up to Eleven. Had a very smooth and bluesy playing style but with a edgy-er twist. He owned a guitar shop. He was pretty influential in the local scene because a lot of fellow rock musicians bought guitars from him directly. Had a lot of knowledge about guitar types, sounds, effects, technical aspects. He was one of the initial victims on the 30th of October.

A lot of people were shocked because of his death, because so many people knew him and he had ties with a lot of musicians, kind of the same as with Adrian Rugina.”

Alex Pascu was the bassist in Goodbye to Gravity and the last member to die. Another member of Thunderstorm, as well as Mihai’s bandmate in Graven, he was an immensely talented bassist (as can be heard with his work on Goodbye to Gravity’s song “Shadow Puppets”). He suffered 75% burns to his body in the Colectiv fire and was transported to Paris for specialist treatment, but succumbed to his injuries shortly after arriving.

Liviu: “Alex Pascu was well known in the underground metal circles for his tireless pursuit for perfection as a bass player. People looked up to him for the sacrifices he made for playing metal in a country where the genre is grossly underappreciated by media or promoters. He was also the founding member of Heavy/Power Metal band Thunderstorm with whom he released two albums and two singles. Alex decided to end his activity with Thunderstorm around 2010 or 2011 when he came with the idea for Goodbye to Gravity. The new band was to explore a much more modern approach to the metal sound.

I actually met Alex in 2009 when he was playing with Thunderstorm as an opening act for Swedish progressive metallers , Evergrey. I invited him to my radio show then and we chatted about his band and what drove him to play metal in the first place. I saw Goodbye To Gravity in 2011 when he opened for Pain Of Salvation. I was really surprise by his new approach to the metal genre, probably because I never would have thought that he had such an appreciation for these modern aspects of metal.

A month before the tragedy in Colectiv, Alex contacted me on Facebook asking me to review his album and also inviting me to the release concert of “Mantras of War”. Honestly I was really intrigued since the album artwork was done by a personal friend of mine (Radu of Axial Lead). We chatted a little while about album production and the dynamics of sound. These were the last words I shared with him before the events in Colectiv.”

Vlad Telea and Mihai Alexandru were the two guitarists in Goodbye to Gravity. Both veterans of the scene, they made their names in groups Rising Shadow and Thunderstorm (Vlad) and Graven (Mihai) before being recruited by Andrei Galut in 2010. Their mixed backgrounds made for a unique sound to Goodbye to Gravity’s guitars and helped set them apart from the traditional metalcore scene. Both were immediate casualties of the fire, as was Mihai’s girlfriend, Catalina Ionita.

Bogdan Enache, also known as Bogdan Lavinius, was the drummer and oldest member of the band, at age 41. He played alongside Vlad in Thunderstorm as well as in gothic metal band Hovercraft (since known as Serenity). He was severely injured in the fire and was set to fly to Switzerland for treatment, however, he suffered a heart attack on the way and the plan was forced to return to Bucharest. Sadly, he was pronounced dead upon landing.

Andrei Galut was the frontman in Goodbye to Gravity. The winner of the 2007-08 series of Megastar (Romania’s equivalent to The Voice or The X Factor), he moved into metal in 2010 with the formation of Goodbye to Gravity. As of writing this, he is receiving treatment in the Netherlands after suffering from 45% burns to his body, and has regained consciousness. However, he is still unaware of the fate of his bandmates or his girlfriend, Madalina Strugaru, who passed away on November 11.

The tragedy in Colectiv has been an unintended catalyst for large scale political consequences in Romania. After the fire, protests swept the country and led to the resignation of the Romanian Prime Minister and his government.

Liviu: “I think it showed the extent of corruption in which local authorities were involved. Politics are a mess here, pretty much as everywhere else. It’s just that the common folk were tired of it. Apparently this tragedy was too much and people took to the streets. In an ironic twist, [the Twitter hashtag] #colectiv became like a rallying cry to fight against corrupt authorities. Still, there are many sides to this story. It’s still too early to have a sound analysis of the entire situation.”

While many more people have died, it is impossible to be able to comment on every single casualty of such a horrific incident. Every death is an irreplaceable loss to the friends, families and whole global community and they will all be sorely missed. RIP.

Universal Music Romania are currently donating all proceeds from sales of the new Goodbye to Gravity album “Mantras of War” and Up to Eleven’s “Ce simti” to everyone affected by the events of October 30. You can find more information on their Facebook page.

Artist Costin Chioreanu, who has created artwork for bands including At The Gates, has released one of his “soundtracks” for his exhibits in order to raise money as well. The soundtrack, “The Quest for a Morning Star”, features current and former members of Mayhem and Sigh, and can be bought on Bandcamp.