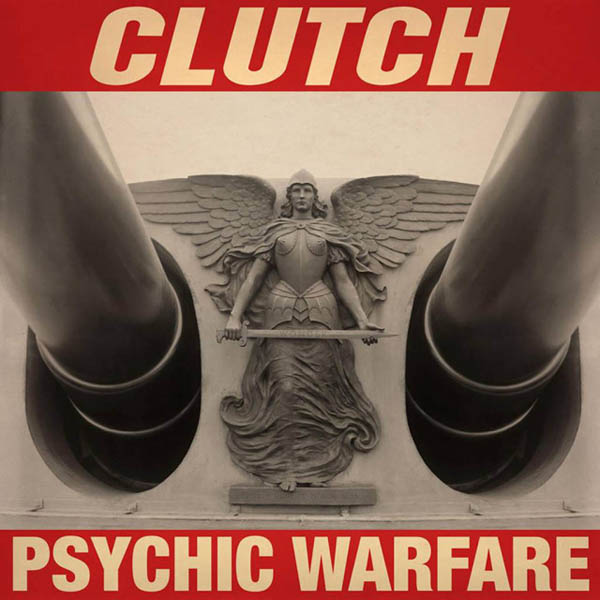 Slamming the pedal to the floor, rock and roll’s humble country bumpkins Clutch return for an eleventh crack at the whip with ‘Psychic Warfare’.

If you’re looking for consistency, Clutch are your guys. They’ve already got 22 years under their belts and not one note of ‘Psychic Warfare’ suggests they’re tiring of it all yet. Each song could easily provide the backing tracks to a number of scenes you’d expect to see in a spaghetti western, even though none of those include innovative victories for the outsiders with their alien rites of heavy riffs and dark atmospheric interludes.

Lead single ‘X-Ray Visions’ projects their signature Southern sass, with Neil’s punchy, self-assured vocals taking pride of place as always. Setting aside the comical announcement of the band’s nicknames, it’s a neat track to lead the way. Invented for passionate crowd call-backs, ‘Firebirds!’ is otherwise uneventful, contradicting the spaghetti western swagger of soap opera ‘A Quick Death in Texas’, in which frontman Neil Fallon asks himself, “How was I to know she had a jealous husband?”

Beyond the devilish temptations of ‘Sucker for the Witch’, a tense courtroom drama plays out amid ‘Your Love Is Incarceration’, providing a groovy ode to the injustice of indiscriminate love. Tim Sult’s fretwork knows damn well it’s good looking, puffing its chest out and preening itself in the mirror. The downturn of ‘Our Lady of Electric Light’ plays a soundtrack to the opening moments of a duel, with a swirling atmosphere and dream-like solo to boot.

A multi-faceted condemnation in the most energetic and catchy guise possible, ‘Noble Savage’ is rock and roll in its raw, defensive state. An unexpected twist in a dramatic key change transforms the sassy melody of ‘Decapitation Blues’ into a menacing threat, while ‘Son of Virginia’ imitates the sprawling Southern countryside as it rolls along into 7 minutes to make one epic closer.

‘Psychic Warfare’ is nothing earth-shatteringly new, but Clutch never fail to deliver an enjoyable record nonetheless. It’s optimistic even when it’s downhearted, it’s racy even when it’s facing another 7 minutes to go, and it’s toe-tappingly catchy even when you thought you’d heard it all before.

Clutch’s Psychic Warfare is out now on Weathermaker Music.