Following on from Jamie’s picks of the best of 2015, today it’s the turn of one of Rock Sins’ most long serving contributors, James Halstead. We’re suspicious that we might see some more Lamb of God love this time around, but let’s dive in and find out….

Album Of The Year – While She Sleeps – Brainwashed

Now THIS is how you return with style. Having been less than prominent the past few years with Loz’s throat surgery threatening to derail things While She Sleeps returned with ‘Brainwashed’ in the spring. Crammed with brilliant riffs, but with enough melody that none of them are robbed of their impact through familiarity this is not only Sleeps best album, but 2015’s best album. 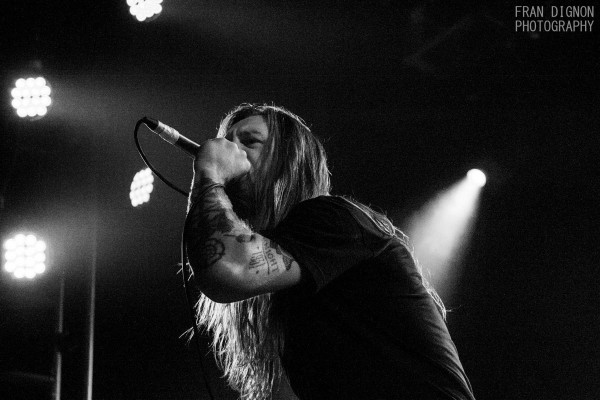 Video Of The Year – Slayer – Repentless

Slayer in a prison riot was also going to be a brilliant video. Throw in Danny Trejo and Derek Mears murdering their merry way through said prison riot and it’s a magnificently violent bloodbath that fits perfectly. Great videos should make a song more memorable and Repentless does that in spades.

Gig Of The Year – Megadeth / Lamb of God – Birmingham 02 Academy

While many saw this as a ‘Megadeth’ headline tour with Lamb of God merely playing second fiddle it was, predictably, the Virginian bruisers who stole the show. It was a set that very, very few metal bands on current live form could touch with the band on stupendously tight form and rattling through a predictably fantastic setlist. Not even an unfortunate delay when an audience member got hurt during ‘Laid to Rest’ could put them off their stride for long and they were able to return and close with a predictably fantastic ‘Redneck.’

Sophie Lancaster stage headliners Fleshgod Apocalypse put on a titanic close to the Saturday night of Bloodstock with their savage blend of beautiful orchestral arrangements and fast-paced death metal magnified tenfold by an incredible live production. Unlike other bands with such dynamic and expansive elements contained within their sound Fleshgod Apocalypse commendably do not fall back upon a backing track but produce each element live with a whole menagerie of backing musicians elevating the blisteringly fast death metal into the stratosphere

Most Disappointing Album Of The Year – Trivium – Silence in the Snow

From a band that produced a record as downright exciting and as huge a return to form as ‘In Waves’ only a few years ago it’s a shame to see them produce something so pedestrian and plodding as ‘Silence in the Snow.’ Trivium are a band that need real pace and Silence in the Snow sacrifices this for some fairly mundane NWOBHM impersonations.

Band Of The Year – Lamb of God

Having produced an album as downright brilliant as ‘Sturm und Drang’ Lamb of God have been in their best form of the past few years on both visits to our fair isle. That they can do this while having had one member release and promote an excellent book and another do an equally excellent job filling in for Megadeth on drums should point to the sheer level of brilliance and hard work present in Lamb of God.

Festival of the Year – Bloodstock Festival

Always the best atmosphere of any of the major UK rock festivals, Bloodstock excelled this year with an extremely diverse lineup and one that showcased the best of extreme music. Trivium’s first UK headliner may have been a bit of a damp squib but this was paid back for in spades with excellent performances from Godflesh, Fleshgod Apocalypse, Cannibal Corpse, Ihsahn and Enslaved. To name all the musical highlights, let alone the highlights of the festival’s atmosphere would take far too long but suffice to say 2015 is sure to go down as a vintage year for Bloodstock.

Stay tuned for more awards from the rest of the team in the coming days!