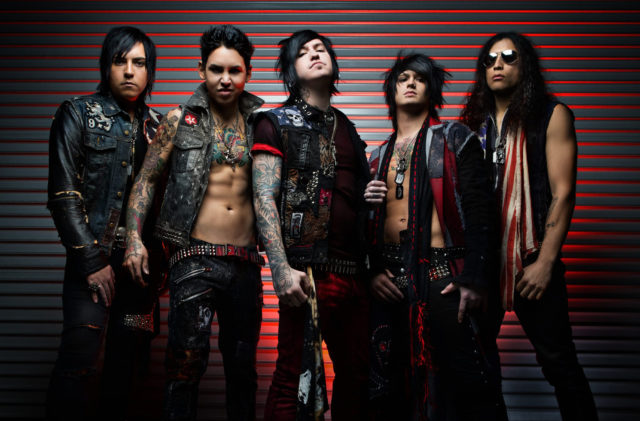 Escape The Fate have been on something of a resurgence recently. Their UK tour was loaded up with some big name supports in the form of New Years Day and Fearless Vampire Killers, so we sent Will Stevenson along to check out the action in Manchester.

New Year’s Day (6) return to a venue they last played just over a week ago, showing that if nothing else, this band certainly tour a lot. It seems they’ve been supporting almost every -core band over the past twelve months and their live show is, as with many other bands in this scene, certainly a well-functioning machine, but a machine nonetheless. Today, the band seem slightly distanced from their fairly sizable crowd, perhaps a product of over stretching themselves with two massive tours in a row, but detrimental to their show regardless.

Fearless Vampire Killers (6) have a lot in the way of charisma and a very well-rehearsed stage show, though very little in the way of properly catchy songs or genuine inspiration. The band play their trite tunes well enough, there aren’t any slipups throughout, yet the entire thing is covered in a glossy fake sheen. You never get to see into the real lives of the band, simply the somewhat tired goth personas that they embrace onstage. The crowd give the band a fairly lukewarm reception; the first few rows a dotted with diehard fans of the group, but the rest of the venue simply nods along politely.

Unbelievably, Escape the Fate (5) have been around for over ten years now. Lead singer Craig Mabbit is nearly thirty years old. His band are on their fourth album with Mabbit on vocals, fifth overall. Yet despite their longevity the songs that get the best reception tonight are the oldest ones in the band’s discography; “Ashely”, “Something,” and “This War Is Ours,” all from their 2008 album of the same name get the sold out crowd bouncing along like nothing else, the title track – used as an encore – is the only song to draw a mosh pit all night.

After emerging onto the stage a quarter of an hour late, the band kick off with a song off of last year’s “Hate Me;” “Just a Memory.” The new songs are adequate, but don’t have the big chorus lines nor the glammy flair of the bands older work and this shows in the crowds somewhat lacklustre response to all of the newer material.

When the singer introduces another old one, “Gorgeous Nightmare,” from 2010’s self-titled album, he dedicates it to the “ladies in the house,” along with any “chicks with dicks.” Politics and music criticism should rarely cross, but, introducing a song called “Gorgeous Nightmare” with a dedication to transgender women isn’t just insensitive, it’s bullying. A better band might be able to sully the memory of this unfortunate turn of phrase with a well performed piece of music, but Escape the Fate can’t manage even this. Though the band seem to perform acceptably throughout the evening, neither Kevin Gruft’s lead guitar nor Robert Ortiz’ drumming is anything to shout about. Several times throughout the set it’s obvious that Mabbit is using a backing track – at first, it appears to just be for the screamed vocals – but when he begins singing note perfect with the microphone dangling near his legs during the single song encore, it’s obvious that a fair amount of the performance has been a sham. 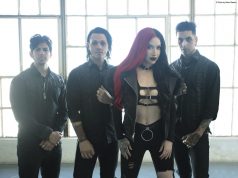 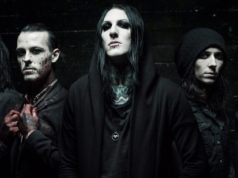 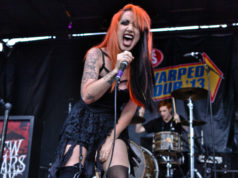 Interview with Ashley Costello of New Year’s Day: “We’ve Been Told: “We’re Not Going To Sign You, We’ve Got a Female Fronted Band!”