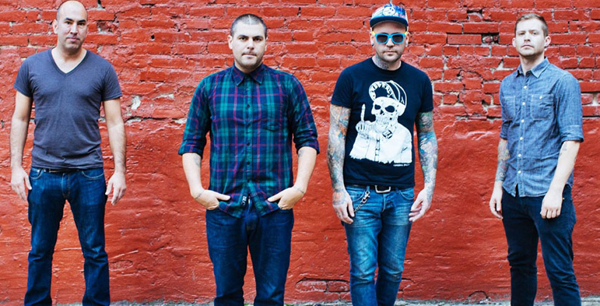 This January, Alien Ant Farm hit the UK on a substantial tour, playing their fan favourite album Anthology in full, with InMe and The Dirty Youth also along for the ride. Rock Sins’ Kim Bates caught up with Alien Ant Farm’s guitarist Terry Corso backstage before their show at The Cambridge Junction to discuss the tour, Anthology’s 15 year anniversary and what’s next for the band.

Alien Ant Farm turns 20 this year which is crazy, how has the last 20 years been for you guys especially with how much the industry has changed and the people are changing?

It’s been a wild ride. We’ve kinda seen it all and done it all now as a band. You know from massive success to falling off the end, to bus crashes. I left the band for five years. Our bass player left the band. It’s funny because we’ve all known each other since we were kids. So it’s a family. We kinda react like a family as far as getting along. In the state of the industry we’ve watched it change. We’re lucky being that we are 20 years old and when Anthology came out and did very well it cemented us because those were the days when labels actually invested in their bands, and marketed them, when people actually would sell a million records because people used to buy CD’s. That being said it set us up for longevity to where we can come out here and do this. I mean, obviously we’re doing this on Anthology which is great, but even putting out records and going on tour is something that is still accessible for us, and I think it has a lot to do with putting all that ground work in for 20 years. It’s a crazy industry now that’s for sure.

Can you remember the moment you guys decided to be a band?

Yeah kinda, me and Mike Cosgrove our drummer, we came up with the idea. We were in a local band in our area together and we were feeling unsettled and wanted something a little more. We thought what if we hand-picked some of the better players in our area and got a band together, and started something new. That was pretty much the start.

Anthology turns 15 this year and you’re playing the whole album in full, how does that feel?

It’s awesome, we love it. We were over here in May with Hoobastank and P.O.D., we just hadn’t been over here to tour; we’d been over for a festival here and there. We hadn’t toured here in so long. It became very clear and apparent to us that, besides having a couple songs that charted well over here we actually had a hit record that people grew up on and was very much a part of people’s lives. Whether they went to college or it was the first record I’ve ever owned. Maybe they went on a trip and it was the sound track or someone met their fiancé listening to Attitude. I’ve heard so many stories and it’s very exciting and inspirational. It’s just been lovely. I think we were in Manchester when we were over last time. Dryden, our singer, asked the crowd what they thought if we came over to do Anthology and a showcase like that, a front to back tour, the whole place erupted. From that we knew so we went home and started making plans for it.

How does it feel to be one of the bands to be engraved in to people’s childhoods?

It’s cool. I like it a lot. I like the smiles on people’s faces when we play. That to me is everything that keeps me in this, you know. Anthology had such a place in people’s lives, I’m flattered. I think it’s a great thing and it makes this tour exciting.

Through crowdfunding Always and Forever came out last year, how does it compare to releasing your back catalogue?

Well, it’s kind of a funny thing. We went to that because we were having so much trouble with the label that we were actually signed to. We were hitting road block after road block with them until we were in a stale state with the label where we were went to them and said, look we don’t really want to work with you guys anymore. They were in a position to just let us go, they were inclined to just let us go. We had to think quickly about what we were going to do so we turned to our fans. What we did was Pledgemusic, It’s like a crowdfunding thing but it’s more than just asking people for help because we offered actually services and items and exchange. There’s a tiered set up of how people could donate. We did things like signed records; one guy bought a gold ticket which means he’s entitled to come to any Ant Farm show ever, forever. We sold a package to a couple of guys who got to come to the club in their area, sound check with us and play with us. It worked out, it was really cool. What kinda screwed us up on that, even though it was a successful campaign, it was hard for us to deliver on time because of the label. The label again put road blocks in front of us like we didn’t have this finished product that we had been promising people. I want to do that again but I want to make sure we have full control because I don’t like upsetting fans, especially when they’re donating to you and what not. You live and you learn.

One of your most well-known tracks is Smooth Criminal, how did the death of Michael Jackson effect the band?

Gosh, sometimes it still seems very surreal that he’s just gone. We all really adored him. To me he was pretty much the tip-top greatest entertainer that probably ever lived. He’s just a badass. We had that connection with him because of the song. We actually worked with him with the video, not directly but with his people, I mean he is Michael Jackson. We gave him a lot of say in the video. We didn’t want to make fun we wanted to pay tribute so we gave him the sign off on a lot of things. That was interesting, just going back and forth with things. You know, time goes by and we lost him, it leveled us all, it was hard for us.

We went to Cardiff, played the Michael Forever tribute and we were the only rock band there obviously. We made some great friends, met the family, his brothers, his mom, Latoya; a lot of people who worked with him from his band to his photographer etc. They all said incredible things to tell us about how much he loved us and he loved the song, how he thought it was very brave. He thought we did a wonderful job. That was incredibly moving. It’s sad that he’s gone, I wish he was still around. It was always fun to see what Michael Jackson was going to do next because you knew it would be good.

After his death, his music was still being released, how do you feel about that?

It’s wonderful for us, I think. I’d hate to think that maybe stuff hits the streets that are subpar to his standards, we’ll never know. It’s good that the music still lives on and he lives on through the music.

With the rise in vinyl sales of the last 5 years, what part do the new generation of vinyl lovers play to the music industry?

It’s interesting to see because we’d all love for those old days to come back, I’m not saying they’re going to come back. I love listening to vinyls, they sound so much better than MP3’s; MP3’s sound terrible. It’s so convenient and it’s around to stand. It’s nice to see that people make the effort to get a little bit more quality, that’s instills a little bit of hope.

Is there anything in the pipeline for Alien Ant Farm fans to look forward to?

We’re going to be touring through the year. We’re hoping to take the front to back tour to territories that the album did well in. We’re hoping to hit South America, New Zealand, Australia and maybe even Canada with it. I think there’s plans in the summer to go on tour with P.O.D. and Hoobastank again, our good friends. We’re all talking about doing our hit albums, like doing a whole tour, like all three bands do their biggest hit album as a tour package. We’re going to go home and start writing; as much as we enjoy a lot of the music on Always and Forever, it was just such a hard process, emotional and physically to get that record out. We’re ready to move on and past things that bum you out. Our label just ruined things for us and it was just a one record obligation to those creeps so now we can go and start writing and be Ant Farm again.

Catch Alien Ant Farm in the UK next at this summer’s Download Festival where they will appear on the Main (Lemmy) Stage on the Friday afternoon.