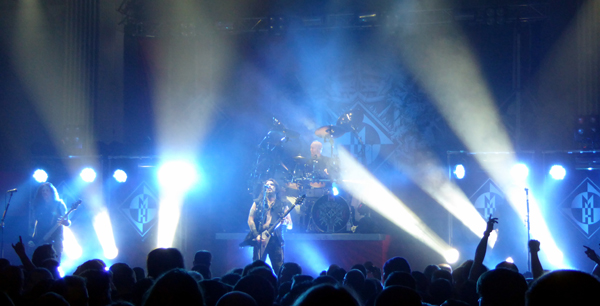 Whenever Machine Head reach UK shores, Rock Sins will generally seek them out. We went along to the opening night of their “An Evening With” tour at a new venue for our team, the rather impressive “Open” in Norwich to see how things would unfold.

In true Machine Head style, things kicked off with what is probably the greatest “show opening” metal song ever, the timeless Imperium. The words HEAR ME NOW, WORDS I VOW, NO FUCKING REGRETS reverberated around the walls of Open as The General, Robb Flynn bellowed them at the capacity crowd while Jared Maceachern was a whirlwind of hair on the bass. The first third of the show flew by in a mix of riffs, sweat and mosh pits to the likes of Beautiful Mourning, Bite The Bullet and This Is The End. A rare airing of From This Day was a particular highlight, and was the kind of special moment that one hoped for on “An Evening With” type of show (more on this later). 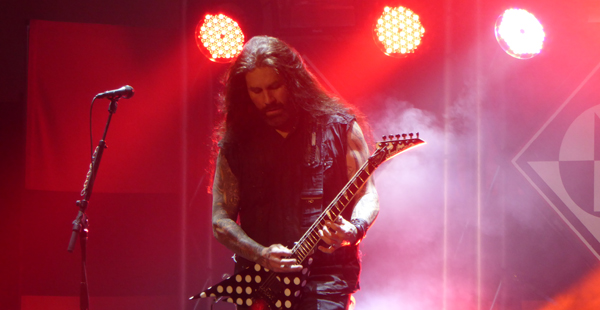 Phil Demmel – Most metal polka dots on the planet.

The show took a serious lull at the mid point with a slightly peculiar guitar solo and a much more impressive drum solo from Dave McClain either side of Darkness Within (complete with traditional monologue from Robb Flynn). Bulldozer and Killers & Kings went some way towards restoring momentum, but it wasn’t until the appearance of Davidian that things returned to traditional Machine Head energy levels. The extended encore definitely pack the required punch. Descend The Shades Of Night, which made it’s live return on the previous tour after a multi-year absence, crescendoed it’s way around the venue. A true surprise was next up in the form of a monstrous sounding Now I Lay Thee Down from The Blackening, which was followed up by fellow Blackening track Aesthetics Of Hate.

What was slightly curious is that at this point Phil Demmel disappeared off stage, leaving Robb, Jared and Dave to play the song as a three piece (which they did in accomplished fashion, although the solo sounded a little off as one might expect with one guitar instead of two). He also failed to reappear until the very end of next song Game Over, and no mention was made of his disappearance whatsoever – perhaps it was an unscheduled toilet break! Once back to full compliment, A romp through Burn My Eyes favourite Old and the soaring traditional closer of Halo brought things to a conclusion in an enjoyable fashion.

Despite having given themselves a full two and a half hours in which to operate in, tonight’s opening date of “An Evening With” felt like a bit of a missed opportunity for Machine Head. True rarities were few and far between and the set list was remarkably similar to the last time the band visited our shores (see our review of their phenomenal London Roundhouse show in December 2014 for a full comparison). For anyone who hadn’t seen Machine Head live in recent years tonight probably came across as far more impressive, but for the regular die-hards a bit more variety would have been nice.

The full Machine Head setlist was:

Imperium
Beautiful Mourning
Now We Die
Bite the Bullet
Locust
From This Day
Ten Ton Hammer
This Is The End
In Comes The Flood
The Blood, the Sweat, the Tears
Be Still & Know
Guitar Solo
Darkness Within
Drum Solo
Bulldozer
Killers & Kings
Davidian
=====================================
Descend the Shades of Night
Now I Lay Thee Down
Aesthetics of Hate
Game Over
Old
Halo

(Reviewers note, having seen the setlist from the following night’s show in Nottingham, the setlist changed considerably from what I saw in Norwich, so for anyone going to another show on the tour may get something very different to the Norwich setlist).