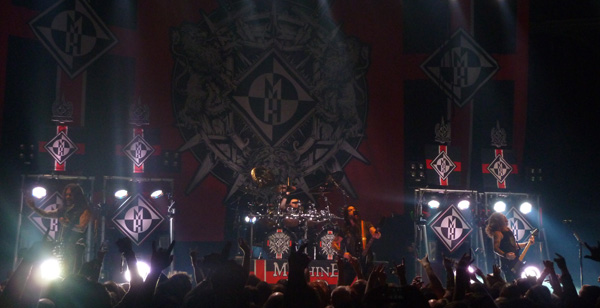 We’ve waited months and now, the time is upon us! The mighty Machine Head return to the UK for eight dates over the next ten days in their first ever UK “An Evening With” tour. No support bands, just an extended set of Machine Head classics old and new alike. Funnily enough, their frontman Robb Flynn, cannot wait:

“We’re doing ‘An Evening With’ MACHINE HEAD. Meaning: it’ll just be us, folks. We are really excited about playing longer sets, throwing in some deep cuts, and just having it be our own world. We did this in the US and eastern Europe recently and it’s worked amazingly well. Fans seem to really love the ‘Evening With…’ format for a band like us who has a long-standing and diverse catalogue. While the sets vary from night to night, there were a couple nights on the last run where we reached the 2 hour and 40 minute mark. It was crazy! We could have played all night, the crowd was so insane!!”

Robb’s also been commenting on Machine Head’s recent decision not to play festivals and to only play headline sets since the release of their last album Bloodstone and Diamonds:

We’re not trying to have a good time with a bunch of people who don’t know who we are. If MACHINE HEAD throws a party, big or small, we don’t want a bunch of ‘strangers’ there. This is about us and you guys, the die-hards, the Head Cases, The Fucking Undesirables! We don’t care about the others out there. We’re here and we’re not going anywhere.
If those people want to be a part of this, they know where to find us. So for the time being, and maybe ‘forever’, we’re done reaching out for them.”

The last few remaining tickets for those shows not sold out can be found at the likes of Ticketmaster and Seetickets (https://www.seetickets.com/search?q=machine+head&search=) priced at around £30.

Stay tuned to Rock Sins as we will have coverage from both the Norwich and London dates on what could be a truly memorable set of evenings.