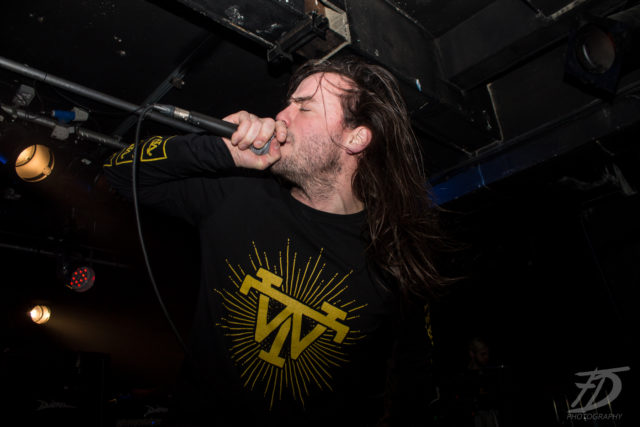 After headlining some of the biggest venues of their career in 2015, Cancer Bats returned to the UK at the beginning of this year to play a bunch of far more intimate show.

Incite (5) kicked things off tonight with a set of fairly bland metal. It wasn’t awful but it’s very forgettable. There’s some decent riffs in there but the songs just blur together. Things do pick up when Liam Cormier provides some guest vocals but very few people have made it down early enough to see this.

Palm Reader (9) spend the next 30 minutes showing why they are one of the UK’s most underrated bands. Brutally heavy yet incredibly technical, Palm Reader leave a lot of the room slightly stunned by what they are witnessing. The band fling their instruments around the stage so violently it feels almost dangerous to be in the front few rows. It is a shame that most of the crowd seem unfamiliar with Palm Reader but they certainly seemed to make an impression with this set.

Lord Dying (7) are less exciting than Palm Reader but are still highly enjoyable. They just churn out riff after riff and are certainly the most appreciated support band by the crowd tonight. It’s a very ideal warm up for Cancer Bats.

Finally Cancer Bats (9) take to the stage with the venue now packed up. Starting off with “True Zero”, Cancer Bats just fire out banger after banger as “Bricks & Mortar”, “Sorceress” and “Pneumonia Hawk” all follow. Cancer Bats just now how to deliver a crowd pleasing setlist whilst still finding time for some deeper cuts. “French Immersion” and “Smiling Politely” are very welcome additions to the setlist. The newer songs fit in perfectly with the classics too. It’s all made better by Cancer Bats being their usual brilliant selves on stage. Liam Cormier is easily one of the most entertaining frontmen around, bouncing around the stage with endless amounts of energy and just having the time of his life. This enthusiasm rubs off on the crowd as well as the pits and singalongs just get bigger as the night goes on. The only real break tonight comes as Liam takes time to talk about how he is raising money for a cancer charity on this tour. Their cover of “Sabotage” leads to the usual carnage and “Satellites” wraps up a great night. Cancer Bats once again prove that they are one of the most consistently brilliant live bands around and whilst it was cool to see them step into bigger venues last year it’s clear they will always be best destroying these tiny little venues. 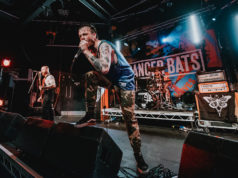