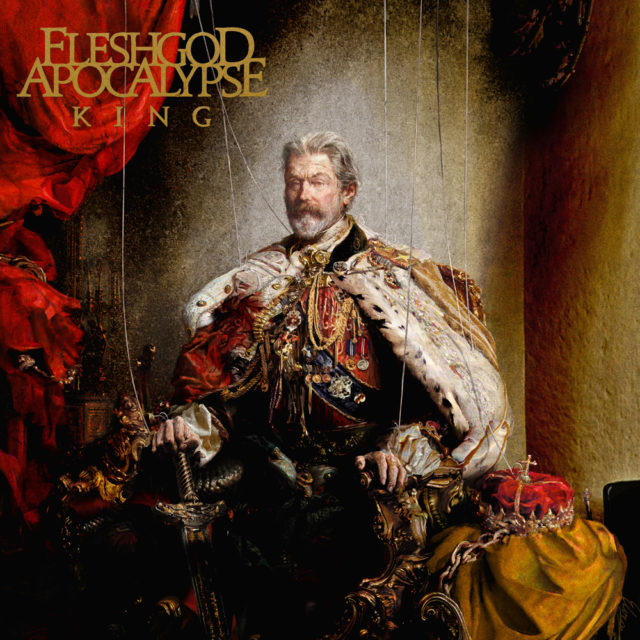 Fleshgod Apocalypse’s fourth full length album King is a stunning example of how to do symphonic death metal right. It’s an often beleaguered sub-genre, full of faux-classical pretentiousness yet Fleshgod have always managed to use their strings, choirs and other grandiose elements to great, chilling effect. King manages to take these theatrical aspirations to even higher places than ever before.

This concept album tells the story of the titular King, who fights against the other characters in his court. This represents, in the words of frontman Tomasso Riccardi in an interview with Decibel Magazine, the inner struggle of humanity. “The king represents the brave part of ourselves… a man who has integrity and love for the values and truth that we all should hope for ourselves. All the other characters in the court represent the fears that can lead us to make everything worse.”

Musically King is superb. It improves on Fleshgod’s previous three (excellent) releases in nearly every way but particularly in scope and scale. Everything about their previous releases remains intact here, multiplied by a hundred percent to deliver a stunningly cohesive and grandiose album.

The album opens with “Marche Royale,” a fitting name for a song carried by intense, building war drums that are joined by staccato striking guitars and a dramatic choir to lead into track two, the thunderous, stomping “In Aeternum.” Track four, “The Fool” opens with a particularly special moment, a somewhat ridiculous riff played on an organ that brings to mind a medieval court before immediately bursting into full pummelling, destructive force with intense guitars, pounding drums and artful strings that add a pinch of melody to the brutality.

A few tracks later we reach the reach the albums most sedate moment, “Paramour (Die Leidenschaft Bringt Leiden)”, a piece of genuine opera performed by guest vocalist Veronica Bordacchini performing lyrics written by 19th century German writer, Johann Wolfgang von Goethe. It’s a beautiful interlude and sandwiching it between the ferocity of “Mitra” and “And the Vulture Beholds” is a wise move as it makes the change in tone more shocking and indeed welcome than ever before.

The track “A Million Deaths” is rarity in the hyperbole ridden death metal song-title world in that the music is actually epic enough to live up to the huge expectations set by the dramatic title. The album climaxes with the penultimate track “Syphilis,” the end of which sees the band make one of the few poor choices on the album, as it fades out into silence rather than finishing on a particularly striking note. This could have been forgivable if it was followed up by a harder, heavier and more epic closing track but it is instead chased by an instrumental piano track “King,” which serves as a pleasant denouement to the action of the record but leaves a hungering for a more ferocious finish.

Despite this somewhat lacklustre finish however, King is undoubtedly the strongest release Fleshgod Apocalypse have put out, with a sound that truly lives up to the name of the band. Ultimately, King is one of the best and most ambitious death metal releases of the year so far and certainly worth a listen for fans of the genre.

King is out now on Nuclear Blast Records.