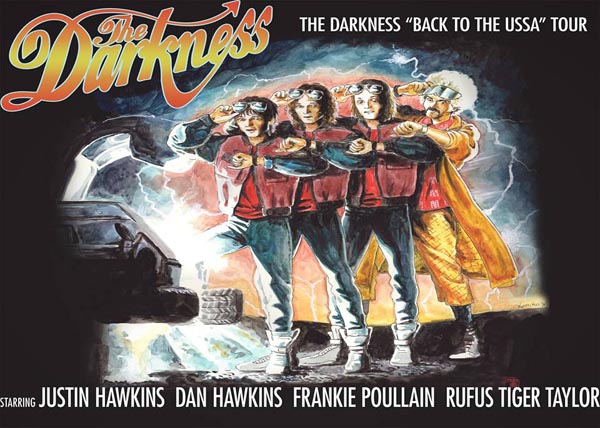 Lowestoft’s finest, The Darkness, are ready to bring their own unique brand of rock n’ roll mayhem and mirth to the United States. The “Back In The USSA” tour, with its rather cool retro-geek artwork, kicks off in Santa Cruz, California today, Friday April 8th. The latest Stateside jaunt takes in 20 cities in just over a month before a summer run of festivals in the UK.

The band released latest album “Last of Our Kind” in June 2015 and have been touring the globe ever since. In proper Spinal Tap fashion they have been losing drummers after Emily Davies followed Ed Graham in vacating the stool. Current sticksman since April 2015 is Rufus “Tiger” Taylor, son of legendary Queen drummer Roger Taylor. The line-up is completed by founding members bassist Frankie Poullain and the Hawkins brothers – Dan on guitar and Thin Lizzy shirts, Justin on more guitar, vocals and dubiously tight outfits!

Here’s a cheeky fan-made clip the guys liked so much that it’s on the official YouTube channel:

Look out for a full review of the Los Angeles gig next week – coming soon to RockSins!

Check out the awesome animated video for single “Barbarian” too: