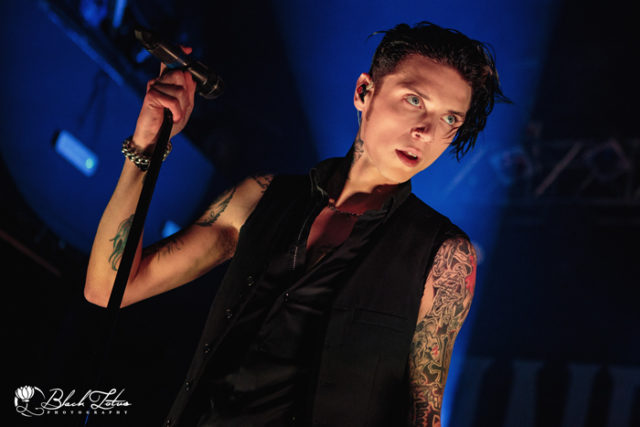 A sold out KOKO buzzes with anticipation at the thought of the show tonight, as rows and rows of people queue patiently to experience the solo stylings of Black Veil Brides’ frontman, Andy Biersack’s, new solo project, Andy Black.

Creeper [8] hit the stage to much applause from a crowd already screaming out for the main act. The band arrive with an energetic performance that never lets up, clearly enjoying the experience. Frontman Will Gould’s vocals soar out over the music, and are especially well showcased during songs such as Misery, which is met with an enthuastic response.

Coming recomended by the man himself is enough for the waiting crowd to welcome the young band with open arms, and Creeper prove once again through their highly entertaining set that they are ones to watch very closely.

Andy Black [8], Andy Biersack or Andy Six – a rose by any other name still knows how to capture the love of a crowd. By the time he is due on stage, the excitement is building to a feverish pace, neatly built by the two members of his touring band as the stage begins to hum with life. From his first appearance, the crowd are enthralled by the easy confidence that he seems to exude, giving his performance the polished finish that only comes from being an experienced performer.

It’s not often that you can stand in a venue and feel as if you are listening to a record, but the venue’s excellent sound coupled with Andy’s pitch perfect delivery make for a performance to remember. Offering both the slower pace of songs such as Beautiful Pain through to his excellent, and more upbeat, first single, We Don’t Have to Dance, the set feels like a showcase of his talents, with even the smattering of covers having that Andy Black stamp that makes them his own.

Regardless of personal opinion on either his solo act, or his music with group Black Veil Brides, Andy Black is a talented man that never puts a step wrong, whether that be during his performance, or his explanations of where each song he is performing evolved from. The crowd, entirely enamoured, clearly act as a catalyst of this – two halves of the whole.

Regardless of whether it’s from the handful of covers performed throughout the night or from his own material I think it’s safe to say from the reaction that Andy Black is clearly a hit with his obviously loyal fans. It’s highly likely we will be seeing more from this part of Andy Biersack’s musical life in the future.