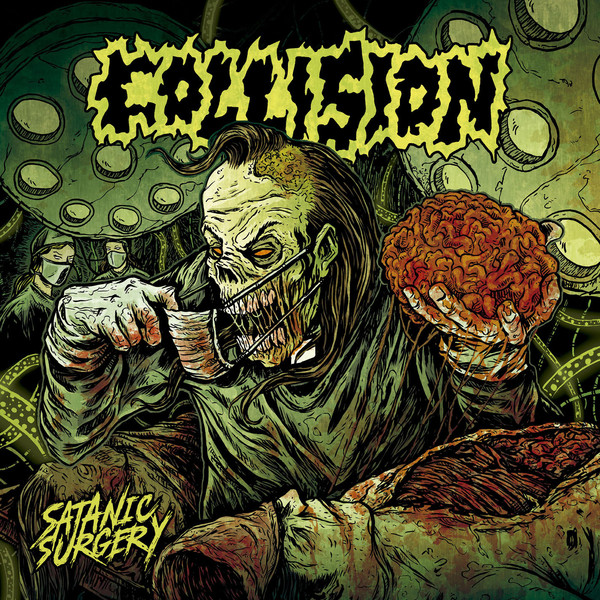 Speed demons Collision are back for another devastatingly intense session of ‘Satanic Surgery’.

Whether you leave with a thumping headache, boiling blood pressure or a blow to the head from a nearby moshing Goliath, this A&E guarantees injuries. The Dutch clan’s reputation for brief sanity-testing ragers remains firmly intact throughout this fourth studio venture, composed mostly of 2015 highlights from their last EP splattered with an extra dose of gore and guts.

Instrumentally sound from the onset, from the racing rage of ‘Cripple The Cross’ to the thrash-heavy ‘Touch Me, Jesus’, the ever-present noodling of stringsman Luc adds depth in swathes. The authoritative drum cacophony through ‘Filthy Feeder’ closely mirrors the muddy vocal vitriol of ‘Piece Of Shit From The Tar Pit’ to ensure frontman Wouter commands proceedings accordingly. The longest running time goes to the impatient drone of ‘Antichrist Gulag’, jam-packed with urgency and the tell-tale signs of an intense writing process – this is the definition of organised chaos.

‘Operation Meatcleaver’ shouldn’t come recommended as a suitable soundtrack for surgery, but their instrumental cooperation is palpable throughout. Bjorn and Wouter’s outstanding vocal range throughout ‘Blood Soaked Graveyard’ and the consuming pace of ‘Aggressive Assassination’ characterise the epitome of fury, best served red hot.

Livid sentiment goes a long way as ‘All You Need Is Hate’ suggests – its phenomenal speed proves testament to their magnetism and endurance – you can almost feel the bruises from the mosh pit. Soon after ‘A Healthy Dose of Radiation’, you’re left drowning in a guttural anthem to frame the terrifically torrid ‘Sanatic Surgery’, even though alliteration isn’t the most metal technique.

A terrorising mindfuck of a record, Collision are ironically proving that practice makes perfect, even in a subterranean grindcore realm where it’s almost impossible to tell.

‘Satanic Surgery’ is out now via Hammerheart Records.