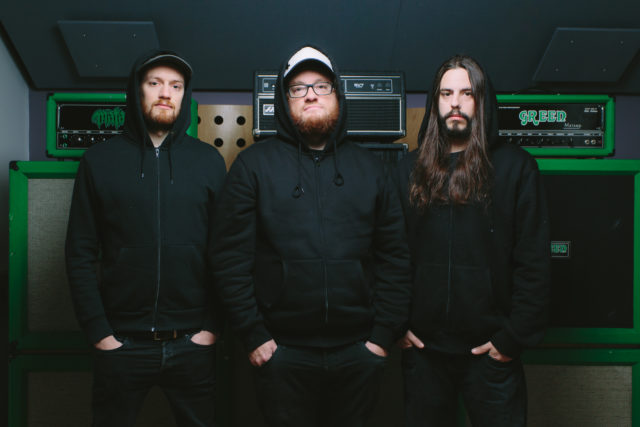 Conan are one of the underground heroes of the British sludge metal scene, with a reputation that has earned them a more-than-respectable slot at the Electric Ballroom at Desertfest 2016. We caught up with frontman Jon Davis earlier in the day to talk festivals, touring and ‘singing about wizards’.

So [new album] Revengeance came out in January – how’s the reception been?

The reception’s been really good actually. We kind of expected that, cause we were really happy with it ourselves, which I guess is always an important first step, but the reception’s been good. People are getting excited about the songs that we expected them to, once or twice getting excited about songs that we weren’t expecting them to, like we had a moshpit in America when we played our slowest song off the album, which was weird, and online reviews and the magazine reviews, they’ve all been really good. In general, its been awesome.

That was the first album with Rich [Lewis, drums] – do you think that’s influenced your sound or the way the band writes?

Yeah, well what we wrote was influenced by him being in the band, how we wrote it was exactly the same as normal. We just wrote in the studio, just practiced, jammed and- like most bands, you know? Everyone says it always starts with a riff, and that generally is the truth – you just start playing something without realising what you’re doing, and next thing he’s playing along. All of a sudden, you’ve got an idea of a verse, or this might work as an ending, or whatever, and you just build up from that. You get a seed, and everything grows from it.

So I’m going to go ahead and assume this isn’t your first Desertfest – are they all similar, or is each a different kind of atmosphere?

No, we played London in 2012, and we played Antwerp in 2014, and then we played Berlin in 2015. Different atmosphere, they’re all totally different. They’re all good, they’re all totally different. I mean you’ve got lots of cool festivals going now, in addition to Desertfest, and its really good to play these sort of things, cause playing to a big crowd’s cool, and we’ll play anywhere – big crowd, small crowd, we don’t really care. But you get the opportunity to play, and to play to a lot of the same people who would normally see you at an independent show. Having them all together in the same place feels really good.

Have you got time to catch anyone else this weekend?

Well I’m getting up and doing a song with Slomatics, I’m tour managing Samothrace, so naturally I’ll be busy seeing those lot, cause I’m helping them with the equipment, and aside from that, I’m not sure what bands I’ll be watching as such, but I hope to see a few.

You guys did your first US tour last year – how was that? Is it a very different experience to Europe?

Well it kind of felt like it at the time, and then we’ve been back since, we went in March this year, and it is different, but only because of where you are – the actual mechanics are the same – you drive to the venue, you load in, you set up, you soundcheck and you play. Aside from that there’s not really- I mean maybe there’s cultural differences, but the actual process is the same. You’ve got to get a visa and the flights are expensive, but aside from that, really, crowds seem similar – you know, knowledgeable, passionate people.

Do you listen to a lot of doom when you’re touring, or does it tend to be a bit more eclectic? Anything that might surprise people?

We listen to heavy music, we also listen to other stuff as well. Like most bands, they’ll think its dead original to listen to 80s pop, but we do that as well. Its not very original I know. We’re listening to this- I dunno, I don’t know how many people are involved in it, but its called Perturbator. Its like dark wave trance music, its pretty cool to drive with. Or we listen to Neil Young, Weezer – we don’t listen to specific types of music, we’ll go for anything really.

So you’re the primary lyricist for Conan – you guys have quite a unique lyrical theme, with influence from Conan the Barbarian etc – how does that come about?

If the lyrics make us cringe and laugh a little bit cause they’re so shit, they normally get the nod. Our lyrics are loosely based on fantasy, sorcery, science fiction, mythology – we don’t really sing about every day life or emotions or anything like that, we let U2 and Coldplay deal with that. And Eyehategod deal with the darker side of life, you know – we can’t do that better than them. And we don’t really have that mindset anyway, so we just kind of go for the sort of thing that we know we’re good at, and that’s our thing really – singing about wizards and fucking monsters. It’s good fun. Singing songs about the game Skyrim or fucking gauntlets or something like that – for me, that’s the most fun I could ever possibly have.

Are you a big fan of fantasy as a genre?

Yeah – I don’t sit at home with a fucking broadsword in my lap or anything like that, but they’re the sort of things that I am most interested in, when I get time to read a book or watch a movie, they’re the types of things I usually seek out. I’m not really into horror, or any other stuff – zombie movies terrify me, so I like to go for things I can control, like fucking Jason and the Argonauts.

Are you looking forward to the set later?

Yeah definitely. We’ve been busy touring – US tour in March, UK/European tour the last few weeks, so we feel as though we’re ready for it, we’re sort of almost in our stride by now. If we’re not in our stride by now we’re fucked, so nah, we feel good – we’re really excited. We’ve got lots of friends here as well, so its going to be cool.

Do you have any specific show prep you do?

A little bit of vocal warmups – we don’t do any of the fucking rituals other bands pretend to do, its all bullshit really – we just eat some fucking pitta bread and hummus, drink some water, maybe do some vocal warmups now we’re old and now we’ve got to look after that sort of thing, but no aside from that, it’s the same as it was seven years ago.

Does the band have anything planned for the next couple of months after this?

Well, we’ve got more shows as you’d expect – we’re going into Europe quite a lot, we’re going to Australia and New Zealand with Weedeater in July, we’ve got lots of festivals, we’ve got a European tour with Samothrace in October, we are heading off into Europe in a few days with Samothrace again, and really we’re just going to try and play as much as we can and promote the album as much as we can.

Especially because you’re a band with something of a live reputation that people expect you to deliver on?

Yeah totally – its hard not to feel under pressure, but I approach this like I do a lot of other areas of my life. I just do something the way that I know how to do it, and if people love it then cool. I know [bandmates] Rich and Chris have the same sort of attitude – we do it to the point where we enjoy ourselves, and everyone seems to come along for the ride. That’s the best way to do it.

Conan’s album Revengeance is out now on Napalm Records.