There are few artists in the world more synonymous with the spirit of rock n’ roll than Bruce Springsteen. Now over forty years into his career, the man known to many as simply ‘The Boss’ has returned to the UK to celebrate last year’s 35th anniversary re-release of his classic double-album The River.

Somewhat in fitting with that, it’s pouring with rain as Springsteen and The E Street Band take to the stage and launch into Atlantic City, followed up by the duo of Murder Incorporated and Badlands. The crowd then, as expected, go immediately berserk – visibly surging forward as the band begin to play The Ties That Bind. It’s the first of what will end up as ten airings from The River over the course of the night.

It’s here that things take a turn for the unexpected though, as Springsteen (on one of his many trips down to the front of the crowd) invites a sign-wielding fan dressed as Santa Claus up onto the stage. He and the newly-christened “Manchester Santa” then proceed to run through a spontaneous cover of Santa Claus Is Coming To Town – much to the amusement of the audience.

It’s moments like this that really seem to prove why Springsteen has enjoyed such a long and successful career – the band simply adores his fanbase as much as they do him. Over the course of the night Bruce will not only venture out into the crowd on multiple occasions, but also gather signs from fans with heartfelt messages and praise. He remarks numerous times about “…how great an audience you guys are…”, and the sincerity is clear on his face.

Setlist-wise, the evening is very much geared towards both the aforementioned The River as well as Born In The USA, but there’s more than enough lifted from other records to allow The E Street Band to flex their musical muscle. Saxophonist Jake Clemons especially shines during the more upbeat numbers, frequently joining Springsteen at the front barrier and dancing in time to the beat. Meanwhile, on guitars, Nils Lofgren and Stevie Van Zandt provide the perfect backing duo to Springsteen’s classic Telecaster tones, mixing effortlessly with Patti Scialfa’s acoustic guitar and the rest of the E Street Band’s playing

By the time Thunder Road looks to bring the evening to a close, the atmosphere is still as electric as when the band began several hours ago. Of course, this isn’t actually the end though, and Springsteen soon returns for what can only be called a typically-expansive encore. Power-ballad Backstreets is the first salvo – its keyboard driven melody dripping with emotion. This is followed swiftly by some mega-hits in the form of the hysteria-inducing Born To Run and Dancing In The Dark (with Glory Days thrown in-between for good measure). The latter sees another moment of quintessentially-Springsteen fan appreciation as a female fan is pulled from the audience to dance with The Boss during the song’s solos. Tenth Avenue Freeze-Out and a rousing cover of the Isley Brothers’ classic Shout continue to captivate the entire stadium, before a monolithic Bobby Jean acts as a goodbye and the band leave the stage.

That’s not quite it though, as Springsteen returns one final time brandishing an acoustic guitar and treats the crowd to a final sing-along of This Hard Land. It’s a touching finish, and one that really hammers home the emotional connection that The Boss has with his fanbase. Truly an outstanding and memorable performance from one of rock music’s all-time greats. 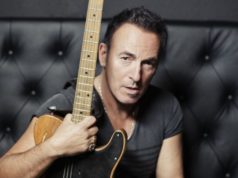