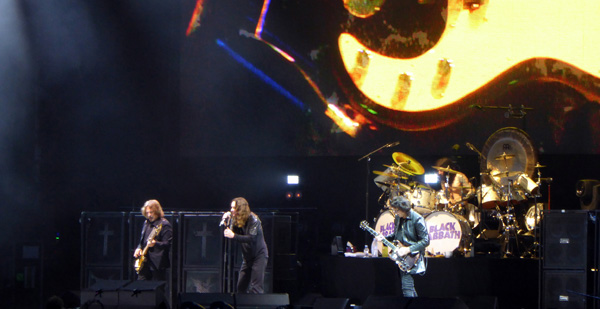 After the first day’s action at Donington, Download 2016 once again kicked back into life for “middle Saturday”. There was lots to look forward to, so let’s get on with proceedings. For anyone who hasn’t yet read our coverage of the first day of Download 2016 you can do so on this link.

Kicking off the action on Saturday lunchtime were a band who have skyrocketed into the metal mainstream over the last 18 months or so, Beartooth (8). They justifyably lived up to the hype with frontman Caleb Shomo particularly impressive. With a set that veered between new album Aggressive and older favourites from Disgusting effortlessly, the crowd reaction got bigger with each song. Few bands get this kind of reaction at lunchtime on middle Saturday but Beartooth were very good value for it. Expect them to be much higher up the bill next time. JG

Black Peaks (8) are a band with a very large hype around them right now, however today’s set proves that it seems completely justified. The Maverick Stage is packed out with people who seem almost in awe of Black Peaks and are instantly bouncing around and singing along with front man Will Gardner, who provided an outstanding vocal performance himself. One thing Black Peaks seem to prove every time they play is that their progressive post-hardcore sound is meant for big spaces, even bigger than today’s tent, and even this early in their time as a band they are ready to take on the world. FD

Next up on the Maverick Stage come Turbowolf (7) and as always at Turbowolf shows, they’re ready to party. The band waste no time before firing into their psychedelic punk rock songs and getting everyone here dancing. The only downside to this set is some slight technical issues with the sound, fortunately Turbowolf aren’t going to let this stop their party, the conga line around the tent is further proof of this and just an excellent way to finish possibly the funnest set of the weekend. FD

With suitable scheduling, it was deemed that Saturday afternoon was the perfect time to take in the wrestling with WWE NXT (7.5) in their specially constructed arena. Six matches of highly varying quality were on the bill, with opener No Way Jose highly entertaining defeating Alexander Wolfe in the opener. “The Perfect 10” Tye Dillinger also got an enormous reaction from the crowd, defeating Sawyer Fulton in an OK match. The two womens matches were of varying quality, with Asuke retaining her NXT womens title match against Peyton Royce in a match that took awhile to get going but was ultimately entertaining, but we wouldn’t count on Carmella and Nikki Storm being near the main roster anytime soon as their match was a clusterf*** of errors, with Carmella eventually (and mercifully) getting the victory. Perhaps the biggest surprise of the session was longtime TNA wrestler Bobby Roode making his NXT debut (getting a huge “holy shit” chant in the process). Main event time saw the biggest reaction of the session as Finn Balor teamed with Hugo Knox to beat the NXT tag champs The Revival in a non title match, with Balor’s every moment cheered to the rafters. Overall, it seems that the NXT at Download 2016 experiment was a success, and their return in the future would be most welcome. JG

Over on the Zippo Encore stage, the prog metal mastery of TesseracT (7) was in full evidence. Reunited with old frontman Dan Tompkins, there is now an almost zen like quality to the band in the flesh which has always been there but has been ramped up to new levels, especially with an airing of old favourites from first EP Concealing Fate. Judging by the enormous crowd who were there to see them, their appeal is seemingly grower bigger than it ever has done before, and on efforts like this it’s not hard to see why. JG

Following TesseracT on the Zippo Encore were fellow British metallers and metalcore favourites Bury Tomorrow (7). Dani Winter-Bates was on top growling form as the band ripped through new songs like Memories and Last Light. The assembled masses lapped up the new songs just as much as the old ones such as Lionheart, and their 25 minute set seemed to disappear in the blink of an eye. A bit longer next time would be good to truly allow Bury Tomorrow to strut their stuff. JG

Back on the Lemmy stage, Dave Mustaine and Megadeth (9) were in absolutely face meltingly good form. They were without Chris Adler behind the drums on this occasion, but that didn’t stop them ripping through the opening Hangar 18 with the force of a hurricane. Several tracks from new album Dystopia were given an airing and they all sounded vibrant and impressive, particularly The Threat Is Real and the title track, which were sandwiched around old favourites such as Sweating Bullets. 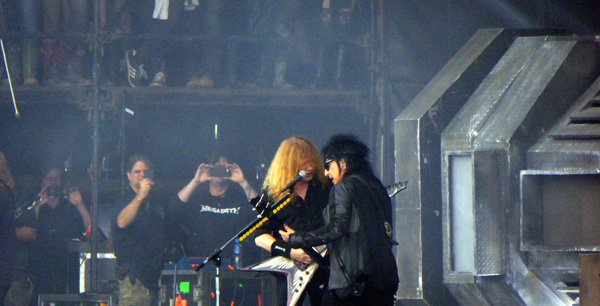 Something unique occured as Nikki Sixx joined the Mega Dave’s and co for a rendition of Anarchy In The UK – a song recorded by both Megadeth and Motley Crue, with entertaining results. Following that special detour, the last third of the set was like ticking off a list of Megadeth classics. Trust, Symphony Of Destruction, Peace Sells and of course the obligatory Holy Wars to finish things off. This was Megadeth’s finest performance in the UK for many years, certainly since the Rust In Peace 20th anniversary performance at Download back in 2010. JG

There was even time for Dave Mustaine to return to the stage after departing (cue several thousand people running back to their previous positions) to present the first ever Metal Hammer Golden God “Spirit Of Lemmy” award to the legendary Triple H! Many had expected and hoped Triple H to be at Download with the presence of NXT and he did not disappoint, giving a rousing speech encompassing Lemmy, NXT, metal, the fans and the obligatory mention to the horrendous weather. 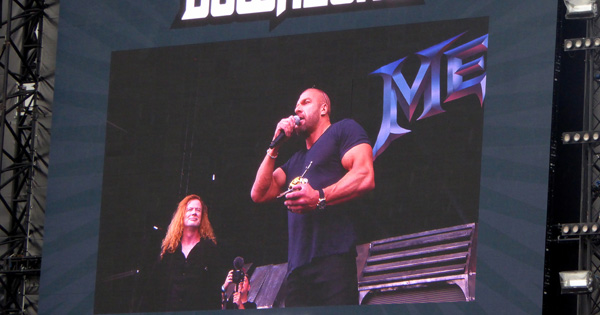 The legend that is Triple H

Returning to the Maverick Stage Anti-Flag (9) are here and they’re ready to bring the punk to Download Festival. Opening with “The Press Corpse” into “Fuck Police Brutality” the tent almost erupts with angry punks screaming along. This attitude continues throughout the entire set as the band address numerous current issues from all around the world, both through song and through speeches. This is something that many young music fans tend to have an issue with today and therefore it is great to see so much passion from a group of music fans regarding the issues addressed. Anti-Flag blitz through 40 minutes of political punk rock featuring everything from a number of classic favourites for example “Turncoat”, to newer songs such as “Fabled World” and “Brandenburg Gate” and even a cover of The Clash’s “Should I Stay Or Should I Go”. Even after such an incredibly high energy set, Anti-Flag plan to go out with a bang by ending their set with drummer Pat Thetic and bassist Chris No.2 bringing their gear into the crowd to perform an incredibly chaotic rendition of “Die For The Government” to close out one of the best sets so far this weekend. FD

While Anti-Flag were inciting a frenzy in the Maverick Tent Skindred (8.5) were doing the exact same thing over at the Zippo Encore stage. Frontman Benji Webbe’s ability to master a crowd is incredibly well documented and today was no exception, holding the impressively sized crowd in the palm of his hand throughout. Material from all parts of Skindred’s career went down equally well, with an acoustic version of Saying It Now, dedicated to one of Benji’s friends who had passed away a particular highlight. It may have been monsoon like conditions for most of the day but that didn’t stop Download 2016 from going apoplectic to Nobody and then using coats, jumpers, ponchos and even one man using his crutches to do the Newport Helicopter as Skindred launched the final assault of Warning. A band, who, along with a few others should be classed as a Download Festival “house band” and just booked every year. They always deliver the goods.

And so, we come to Black Sabbath’s (7.5) final ever performance at Download and Donington (or so one would think anyway, band retirements are always a dangerous business). In the build up thoughts, as they often do, turned frequently to Ozzy Osbourne and what level of performance he was going to be capable of putting in, or not as the case may be.

It was a fairly ropey start, with the opening “Black Sabbath” being out of tune (not that the 80,000 assembled in attendance seemed to give one ounce of a crap as they bellowed the lyrics back at Ozzy and co) and he struggled to match the pace in Fairies Wear Boots. By the time War Pigs rolled round about 20 minutes later things had improved quite considerably, meaning the audience were not covering for Ozzy this time on one of the band’s most iconic songs on it’s final Donington airing. Behind The Wall Of Sleep was a particularly notable song for being able to enjoy the (still) outstanding skills of both Geezer Butler’s metronomic fingers on the bass and the Iron Man himself Tony Iommi, who could still out shred almost anyone on the planet despite his health issues.

Heading into the final straight, songs like Iron Man and particularly Children Of The Grave (“everybody go f***ing crazy were the instructions from Ozzy”) were greeted as one might expect. Horns were thrown, fists were pumped, hair flew everywhere as the UK’s biggest rock and metal festival took in the metal forefathers one last time. Ozzy was particularly humble towards the end, thanking everyone many times for “such a great career” and the loyalty of their fans over the decades. Of course, it couldn’t truly end on anything other than Paranoid, so of course that most notable of riffs kicked off the short encore before Black Sabbath finally bid Donington farewell for the last time. It was by far from the perfect performance from Sabbath; While Butler, Iommi and drummer Tommy Clufetos were all on good form as expected, really this was going to be judged on Ozzy. He wasn’t fantastic, but most importantly he wasn’t terrible either, and that was good enough to allow those who worship at the church of Black Sabbath to have a great time with their heroes once again. JG

That’s it for Saturday of Download 2016! Please stay tuned for our full coverage of the last day of the festival coming very soon!