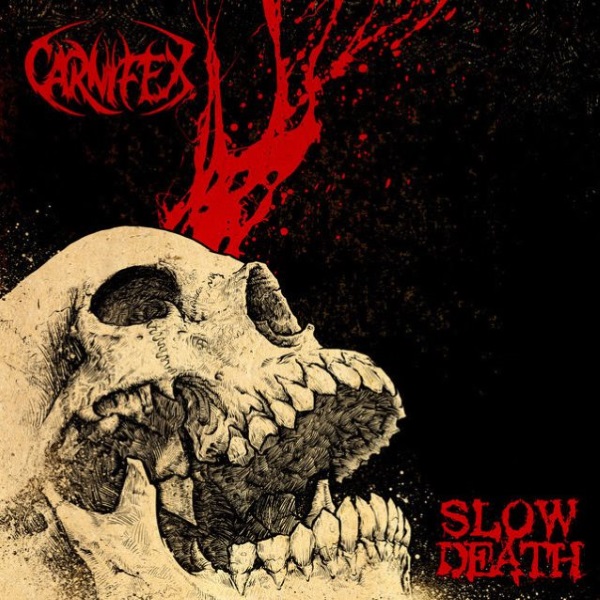 Carnifex’s sixth album is no ‘Slow Death’, but a passionate demonstration of their talents beyond the mortal coil.

Deathcore’s ever faithful Californians have graced our dungeons for a whole decade, and 2016 is the year they return to the grave. ‘Slow Death’ visits their mortal stubbornness on the way into the underworld and their swift return, an existential return ticket.

The bold ecclesiastical opening of ‘Dark Heart Ceremony’ soon throws open the gates of hell for annihilating bass lines and a towering existential sentiment. “This is my last goodbye,” cries Scott Lewis through ‘Black Candles Burning’ while Jordan Lockrey’s noodling envelopes the occasional atmospheric snippet that never outstay their welcome.

With a cavernous vocal depth, the title track sees their familiar lyrical nihilism through lifeless eyes, producing a jugular-snapping pace alongside an almost heavenly electric solo. The gravedigging gravitas of deep south anthem ‘Six Feet Closer to Hell’ is echoed neatly by the phenomenal stringsmanship amidst ‘Drown Me in Blood’ and racing rage of ‘Pale Ghost’.

File album highlight ‘Life Fades to a Funeral’ under ‘incredible showcase of talents in instrumental form’ – this uncharacteristically gentle instrumental somehow fits perfectly and brings a sense of completion to their sixth opus.

Amidst the commanding drums of ‘Countess of the Crescent Moon’, unforgiving chimes herald imminent chaos and never fail to impress. Rising from the grave it’s only just been chucked in, ‘Servants to the Horde’ holds a contagious riff and incendiary growls to close on a note that suggests this is by no means a death knell for a band their genre depends on so deeply.

‘Slow Death’ is no calculating innovation or threatening game changer, simply a self-assured proof of Carnifex’s magnetic presence. Simultaneously accessible and destructive, the omnipresent atmospherics throughout save this from becoming another eventless deathcore addition.

Slow Death is released on the 5th of August 2016 through Nuclear Blast Records.