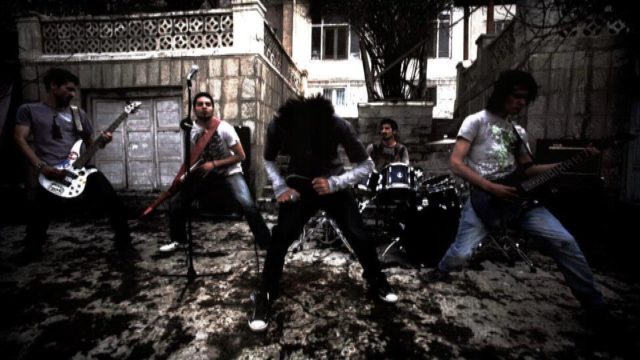 If only one band in the world can sincerely claim to have risked their lives for their music, District Unknown surely has to be considered a candidate. Generally regarded as Afghanistan’s first heavy metal band, the group faced many threats not generally faced by Western bands, including playing in country ravaged by war for nearly 40 years, and facing death threats from conservative religious groups and terrorist organisations such as the Taliban.

In 2014, they released their debut album Anatomy of a 24 Hour Lifetime and featured in the documentary “Martyrs of Metal”, a film which saw them honoured with the Global Metal Award at the Golden Gods Awards in 2015. Now, after time spent abroad honing their craft, we spoke to lead guitarist/backing vocalist Sulleiman “Sully” Omar about how the band has developed and to provide an exclusive premiere of their new track, “64”.

Since the release of Anatomy of a 24 Hour Lifetime, things have been very busy for the band. Studying abroad, winning a Golden God Award, how have these things helped you grow as a band over the past 2 years?

Sully Omar: Our music has taken an interesting turn since the release of Anatomy. Qasem (Foushanji, bassist/visual artist/writer) and I are both living in Denver, CO, so we have been able to work a lot more consistently on furthering the band’s activities. Winning a Golden God has been an incredible honour and proved something we already knew: that District Unknown is one of the most interesting metal stories in the world. To receive the recognition from such prominent members of the international metal scene was gratifying. We continue to move forward and write new music every week even though our members are all physically located in different parts of the world right now. We are not actively touring due to circumstance, but we have not slowed down writing.

What can you tell us about the direction you’re aiming for in your new material?

Sully: We are focussed on further improving our musicianship. Since I became heavily involved in the writing of DU’s new material, I began a personal focus on taking my songwriting skills to new heights. We don’t really choose a particular direction to write towards. We just do what feels right for DU and try to stay true to the underground roots from which we came without compromising our always-improving standard of skill. With “64”, we have explored territory that we normally do not touch; by writing a dirge for victims of a suicide bombing in Kabul during April 2016 (we normally explore more abstract themes). So you could say we have crossed into new territory but we’re generally comfortable with the direction we were in after Anatomy.

How has the metal scene fared in Afghanistan since you guys broke through?

Sully: Our breakout in Afghanistan opened the doors for a few other bands to become more comfortable playing with electric guitars and loud drums in front of people. These other bands also gave a mutual boost to DU by way of participation. We have a specialized fanbase of hardcore metalheads in Afghanistan which has always been our foundation. This is a limited group of people who are also doing their part to share music they enjoy with the other youth in Afghanistan (DU is among those bands). However, we have not had a major, culture-shaking impact in that sense. To be honest we never expected such an impact and are very aware that our music will (for many reasons) always be supported by an exclusive minority of people in Afghanistan, and we’re okay with that.

Could you suggest any artists for readers to check out, who are unfamiliar with the Afghan/Central Asian music scene?

Sully: We are deeply connected with the art and music scene in Afghanistan. Some of the musicians we recommend from Afghanistan include alt-rock band White Page, band Morcha (spearheaded by activist/artist Massoud Hassanzadeh), and rap duo Fist. DU is also largely involved with the visual arts scene in Afghanistan. We recommend checking out works by Ramin Naqshbandi aka “Pink Rover,” Hamed Hassanzadeh, as well as our own bassist Qasem aka “Dark Artery.” These are a few acts that we like among others.

Last year, the band was caught up in a minor controversy when a contestant on the talent show “Afghan Star” was seen to be plagiarising your song “Two Seconds After the Blast”. Did anything come from your complaints? Is plagiarism a problem in Afghanistan’s music scene?

As sad as it was to see someone literally steal our song on national television, we eventually moved on and realized the guy can’t write his own music and we can, so we have the advantage. The people that matter the most know the truth and that’s all that matters to us. We did reach one of the judges on the show and the contestant was promptly disqualified, so we do not know if it was connected with our efforts or if it was for another reason. But the guy eventually fell completely off the radar just as we expected so we moved on.

Plagiarism is not a big problem in Afghanistan. This particular individual had personal problems with DU after DU rejected him desperately trying to join. He had asked us to soften up so our music is more attractive to girls and we basically laughed and told him to get the fuck out. So we’re not fazed; this was a weak attempt at revenge and now nobody even remembers who he is.

What are your hopes for the next District Unknown album? Is there any chance of the band touring Europe in the future?

Sully: We hope to release more skillful, higher quality music that remains true to District Unknown and its past. Touring is not particularly and option for us at the moment but if the cards are right and the stars align, we would not be opposed to considering an offer to tour anywhere, including Europe where a lot of similar music is popular.

Without further ado, we are proud to bring you the fantastic brand new track from District Unknown, “64”, which you can hear below. The band is currently working on its sophomore album. Follow them on Facebook for updates. “64” will be available as a free download from the band’s Soundcloud in the near future. 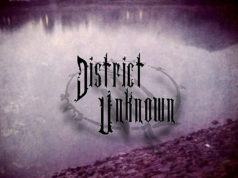