The fifth installment of UK Tech-Metal Fest began at Newark Showground on 7th July. Rachael Griffiths was there to cover the whole event, and here is the first set of images, with plenty more to follow!

Featured in this gallery are Seek Solace In Ruin, Fall of the Archetype, Jonestown, Akord, Sworn Amongst, Visions, No Consequence and headliners Napoleon.

More photo galleries will follow soon (Rachael managed to cover 50 bands for us over the four days, and after being tied to her editing station for another four days is now quietly regretting throwing herself into her work with such enthusiasm).

We’ll also be publishing a review of the weekend in due course, but if in the meantime you want to know more about TechFest, then check the festival out at the following places: 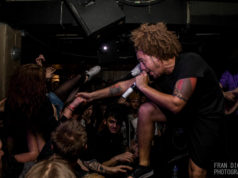 Monuments Live Review & Photo Gallery From The Borderline, 27th May