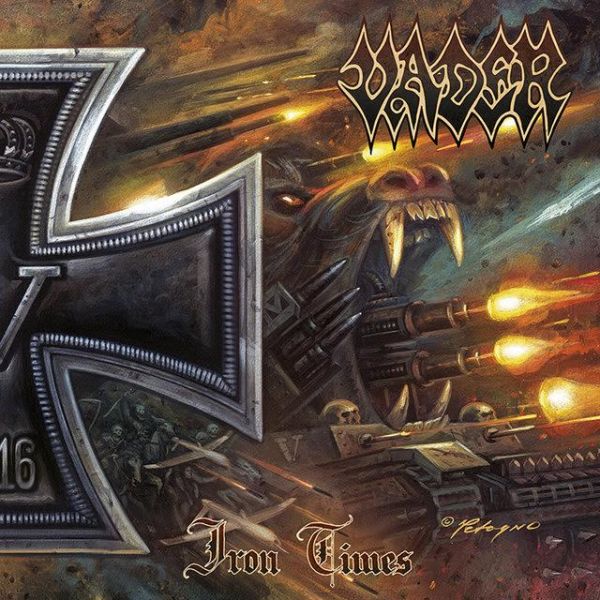 Vader’s latest EP Iron Times, intended as a taster ahead of a full studio album, lingers for the most part around the average mark. Certainly, it’s not a poor effort; Parabellum and Prayer to the God of War are typically Vader with a punishing rhythm sections pushing a more riff-driven focus compared to previous album ‘Tibi Et Igni.’ Although it’s executed with Vader’s usual competence and expert musicianship there’s nothing that can really stand toe to toe with the best of even Vader’s recent musical output.

While the riffs aren’t bad, the vocal delivery is its usual level of vehemence and the production does a fine job of putting over the old school Vader simplicity that they’re clearly aiming for with these songs there’s just nothing that elevates the original songs on this EP to the level of compositions such as ‘Go To Hell’ or ‘Hexenkessel.’ The original songs on here are good, but not exceptional.Of course, that’s only the original material on ‘Iron Times.’ What really redeems this EP is the utterly superb rendition of ‘Overkill’ that ends it. Ideally suited to Vader’s excellent rhythm section and Pietr’s sense of fun his vocal delivery blows this cover into the stratosphere.

However, despite the problems already highlighted, it’s probably unfair to focus on these flaws too much. ‘Iron Times’ is clearly intended as an appetiser for the main product; Vader’s next full-length ‘The Empire’ and as an appetiser it does its job admirably. Unfortunately as a standalone release there’s not much to excite beyond the excellent Overkill cover.

Iron Times is out now on Nuclear Blast Records.