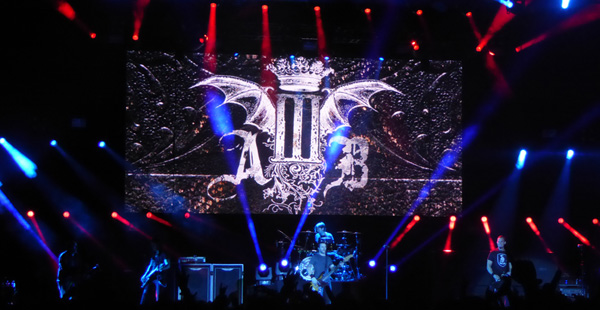 When Alter Bridge are in town, Rock Sins will follow. Add the Danish rock stylings of Volbeat and the French mastery of Gojira into the mix, and it was nothing less than one of 2016’s must see tours. After two hugely successful visits to Wembley, Alter Bridge have graduated to The O2 Arena in London, so it promised to be a special night for many reasons.

Due to the increased security measures in place tonight at The O2, Gojira (8) are already in full flow once the scanners and bag checking is navigated through. There are however definitely worse introductions to a show than being blasted at full volume with Gojira mid Flying Whales, which sounds as enormous as it should in the cavernous O2.

This next song is called “Back Fucking Bone!” remarks Joe Duplantier before launching into one of their most well known songs; Safe to say some in attendance look like they had absolutely no idea what they were getting themselves into having not checked Gojira out before the show. There are plenty of fans in attendance for the French titans though, and their set is warmly received. It was only a shame it was not longer, and we were not able to hear all of it.

Volbeat (7) brought their usual well meshed combination of feel good songs accompanied by an ocean-liner sized collection of great riffs. They did however struggle at times to get the levels of audience participation desired by frontman Michael Poulsen, referring to part of the seating section as “you guys with the legs” when eventually convincing them to get to their feet at one point.

A setlist comprised primarily of songs from the band’s last two albums wouldn’t have pleased all fans of Volbeat, but with songs like Dead But Rising, Lola Montez and a rifftastic Seal The Deal, it couldn’t go too far wrong. Highlight of the performance was the surprise appearance of none other than Barney from UK grindcore specialists Napalm Death for a guest turn on “Evelyn”. A very enjoyable performance from Volbeat, which for some reason didn’t quite spark a chord with the audience in the way one might have expected.

Things definitely ramped up a level when headliners Alter Bridge (9) took to the stage (five minutes early no less). Opening with new track The Writing On The Wall was a slightly curious choice, given the bands area of suitable opening songs but it was received well enough.

What followed was 20 minutes of an assortment of classic Alter Bridge at their best; Come To Life, a thunderous Addicted To Pain (complete with Scott Phillips dialling the kick drums up to 11 with some huge fills) and a huge singalong for Ghosts Of Days Gone By. The magical Cry Of Achilles (complete with THAT bass breakdown from Brian Marshall) then cranked up the headbanging in the arena as hair flew everywhere.

Of the new material mixed in from The Last Hero, Crows On A Wire seemed to go down particularly well, even when sandwiched between a hugely confident vocal from Mark Tremonti on Waters Rising, and the always goosebump inducing, tearjerker of an acoustic version of Watch Over You from Myles Kennedy solo. In keeping with the spirit of tonight’s show being something really special, one lucky member of the Alter Bridge family got to take home a VERY special souvenir. Following a sprint through a roaring rendition of Isolation, Mark Tremonti handed over his guitar to a member of the audience in the front row – an amazing memento for whoever the lucky recipient was!

Following Isolation, the sound of Blackbird soared through The O2; a song that was forever destined to be played in venues such as this, while a very distinctive and familiar drum intro signalled the always awesome Metalingus, the catalyst for many a bangover for the next day.

The main part of the set was closed with a welcome return for Open Your Eyes, a suitably fitting conclusion to the main part of the evening. An encore consisting of the majestic “Show Me A Leader” (what will be an Alter Bridge classic for years to come) and the traditional Rise Today was just what the evening needed to finish on a perfect high.

The full Alter Bridge setlist was:

Alter Bridge proved once again tonight that they are the quintessential modern arena rock band. They have the talent, the tunes, and Myles Kennedy has the voice to outperform almost any other vocalist on the planet. Many were surprised and disappointed that they weren’t announced as Download Festival headliners for 2017, surely come 2018, the time will have come.

Limited tickets remain for some of the other shows on this tour (check availability now at Seetickets). Go and see it, you won’t regret it! 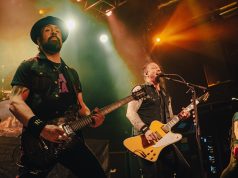