Once again the Impericon Never Say Die tour rolls around to London bringing the usual mix of Deathcore, Metalcore and Hardcore. This year tour had an added element of excitement with it being Whitechapel’s first proper UK tour in five years.

With A ridiculously early set time and being one of two hardcore bands on a seven band line up, things didn’t look easy for Polar (8). However this didn’t stop them from getting Never Say Die 2016 off to a brilliant start. The band could not be more fired up, with “Blood For Blood” providing an absolutely ferocious start to proceedings. They might not have been as heavy as other bands on the line up but they make up for this by pouring all their anger and emotion into this set. At the centre of it all is Adam Woodford who puts everything he’s got into this performance and it rubs off onto the crowd. I wasn’t even 6pm before the entire floor was taken up by a circle pit. “Black Days” adds a slight melodic break to proceedings and gives the fans down the front a chance to join Woody for a sing along. Polar have continously been one of the hardest working bands in the UK and on nights like this it’s clearly worth all the work they put in.

Make Them Suffer (7) aren’t quite as explosive as Polar but they keep the energy levels high. For a band who haven’t been to the UK very often, they’ve still managed to build an impressive following here. The whole room bounces along to symphonic metalcore. It’s a nice touch actually having all the keyboards and synths played live and not on a backing track, giving the performance a more authentic feel. Vocalist Sean Harmanis keeps the crowd engaged from start to finish and the emotion he puts into songs like “Let Me In” makes his performance more believable. Like Polar, Make Them Suffer have an unfotunately short set time of only 25 minutes but they definitely make the most of this time. Hopefully this will see Make Them Suffer continue to climb up these kind of line ups.

The energy in the rooms drops noticeably for Fallujah (5) who aren’t particularly bad tonight but the performance just feels a little flat. Their songs are very impressive from a technical standpoint but there’s just very little for the audience to latch onto tonight. And with the exception of vocalist Alex Hoffman the band don’t seem particularly excited to be on stage tonight. Given how energetic the first two bands were, Fallujah just really fail to stand out tonight.

Despite some huge technical issues delaying their set by 10 minutes Obey The Brave (8) deliver the most fun set of the night. This is hardcore in it’s most simply form, there’s nothing clever about it but that doesn’t stop it from being great fun. Every beatdown is met with the crowd breaking into all out war. Alex Erian delivers all the right moves you’d want from a hardcore frontman and keeps the crowd fired up from start to finish. Given the 10 minute delay the band rarely let up and tear through as many songs as they can in 25 minutes. They still end up having to cut things short which is a shame given how great things were going for them but “Full Circle” wrapped up the set in brilliant fashion.

Next up for Never Say Die 2016 was the first band in the triple threat of some the best names in deathcore. Musically Carnifex (7) end up being more of a straight up death metal band but they were still part of the deathcore scene. Tonight they go all out on brutality providing easily the heaviest set so far. Their setlist focuses more on their two most recent albums which sees more of the black metal influences but it’s clear fans have completely embraced these two albums. The band still like to have some fun as well getting the crowd bouncing along to songs “Hatred and Slaughter” and “Die Without Hope” is certainly an entertaining sight. Fan favourite “Hell Chose Me” ends the set on a real high as the entire room screams it’s final mosh call.

Thy Art Is Murder (8) appear to be at an odd point in their career. Still without a full time vocalist and deep into the touring cycle for what is easily their best album yet, it’s hard to work out quite what is happening with the Australian deathcore crew. However whilst he might just be filling, Nick Arthur is doing a brilliant job with Thy Art Is Murder. Opening with the crushing combination of “Holy War” and “Light Bearer” Thy Art Is Murder aren’t messing about tonight. Focusing entirely on Holy War and Hate they fill 45 minutes with all their best material. It’s no surprise that “Purest Strain Of Hate” and “Reign Of Darkness” get the best reaction of the night but those songs are certified deathcore bangers at this point. The rest of the band are incredibly tight with every riff sounding heavy enough to shake the entire room. Hopefully Thy Art Is Murder will settle on a full time vocalist soon enough because it would be a huge shame to see the band lose too much momentum at this point in their career.

Finally it was time for Whitechapel (8) to bring the night to a close. Given the huge line up before them it’s nothing short of a miracle that the crowd aren’t completely burnt out before they come on stage. Whitechapel play with such a mechanical precision tonight with every groove and breakdown executed in such a clinical fashionan. Phil Bozeman proves just why he’s one of the best vocalists in the game, sounding absolutely monstrous tonight whilst managing to make it look so easy. The set focuses largely on their latest album Mark Of The Blade and whilst this isn’t the bands best work, the songs certainly gain something in the live environment. They even slow things down a bit for “Bring Me Home” which features some incredibly rare clean vocals. That’s not to stay the song isn’t heavy, the dark atmospherics and screamed vocals keep it from turning into a dreary ballad. Again it’s the older material that gets the best reaction of the night, “This Is Exile” arguably being the highlight. They might not come here often but Whitechapel prove why they have always been one of the most popular names in deathcore. Hopefully we won’t have to wait as long for another tour. 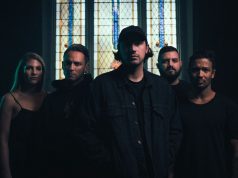 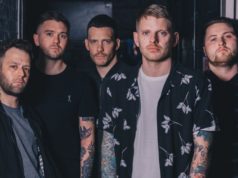 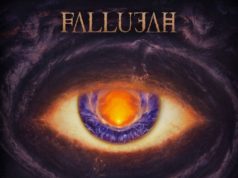 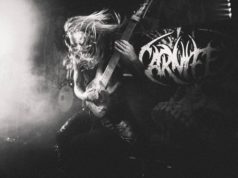 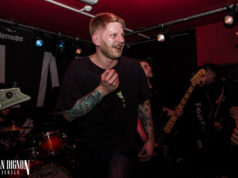 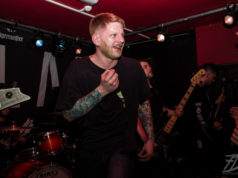 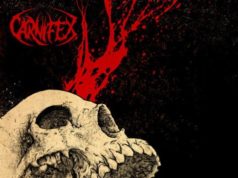