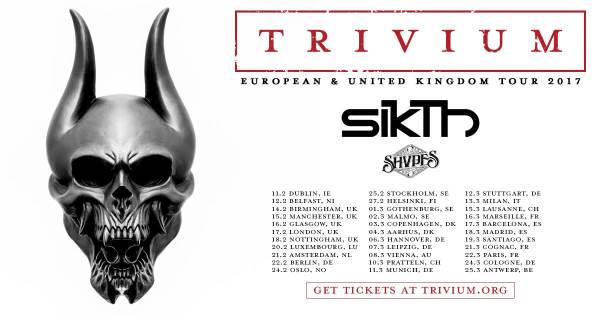 As might be expected, we were delighted when Trivium announced their return to the UK a few weeks ago. That news has now gotten even better with the announcement of just who their support bands are going to be.

Filling the main support / special guest slot is none other than the mighty Sikth! The Djent forefathers and tech metal legends have been putting in some impressive road time since their reformation in 2014 and this looks set to be another fantastic tour for them. Trivium will have a hard time following Sikth if they’re at their best – but that is one contest we can’t wait to see.

Also onboard for the trek are Brit rising stars Shvpes – continuing the tradition of Trivium touring with the younger members of the Dickinson clan. Trivium toured many times over the years with Austin Dickinson (be it Rise To Remain or As Lions) and now it’s brother Griffin’s turn. Shvpes have been making waves with their debut Spinefarm Records release Pain.Joy.Ecstasy.Despair and this tour will give them the chance to take it to their biggest audience yet.

A reminder of the tour dates follows:

Tickets are available now from Live Nation and Ticketmaster as well as all of the other usual online ticketing outlets.